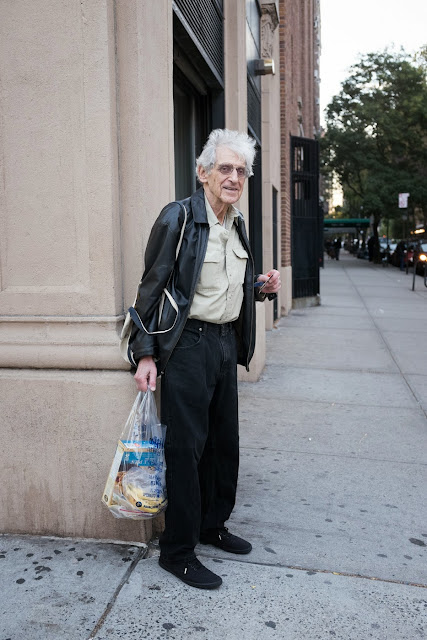 I’ve lived around here for more than 50 years. I came downtown when I was about 18 and I’m now 85. I grew up in the Bronx, escaped from the Bronx, and started music and then art and I worked my way down here.

It was a creative area when I moved downtown and rents were incredibly low. My first place, I lived in a 4-room apartment for $28 a month in the West Village. Then I lived over between Avenue B and C and it was like $18 a month. We fixed the apartment up. We tore the walls down and stripped them and finished the floors and when I left they were getting about $2,000 a month.

When I moved here, it was a neighborhood with a lot of ethnic groups clinging together. There were a lot of Polish people, Jewish, Italian. Lanza’s was where the Mafia used to meet. That was fabulous. At one point there was always a big limo parked outside and someone would be polishing it and it would be one of the dons inside eating. It wouldn’t be anybody else in there but a couple of tables being used. They had their meetings in there.

I met my wife in the neighborhood. I was an artist, designer, and sculptor and she did the same stuff. I had just quit a job that I had for a long time as a display director for Barnes and Nobles. I designed the stores and the interiors. My wife had a display studio on 2nd Avenue and she lived on 2nd Avenue and a mutual friend of ours said that she was in trouble and needed help with her business.

So I came down, we met, and that was it. It changed my life around. We started working and living together 24 hours a day. It was Christmas time so we had all these projects. Christmas time in the display business, you work your ass off. You work 24 hours a day. We worked and lived together for 50 years. She just died last year.

We did displays all over the city, but in the recession of 1973, our business collapsed because we weren’t a union shop. So I went out and started working for other people and corporations. I started producing displays. Not just one at a time, but thousands. When I started I was designing one thing at a time — I designed it, I built it, and I installed it. By the end of my career I was producing thousands of displays that went all over the world. Anything would go as long as you had an idea that would make it happen and make it sell.

Computers changed the world. That’s when everything started to be produced out of the country. All the parts were made in China and Taiwan. I would have to go there to produce the displays. That was an experience. Especially when they fucked up and you had to make them do it right and not lose face. It was a whole psychological thing where you had to go in and tell somebody they screwed up. You couldn’t make them lose respect. You just had to allow them to find a way to correct it, while you suggested ways for them to do it.

I’ve seen things evolve and I was there through the steps as they evolved. Machines started doing what I used to do by hand. I learned all of these pieces and machines that did the individual aspects of where we are now. The technology changed but the concepts and ideas never changed.

Such an interesting guy with an intriguing face to boot!

Seems like a very cool guy, and although I haven't see all of James Maher's series I would guess he's probably the oldest subject yet. Thank you James yet again.

Great piece of writing. Thanks!

When Lanza's was Mafia, the FBI used to hang out at 171 Avenue A, the grey building across the street between Iggy's and Eye Works; they were set up on the second floor with the giant picture windows behind opaque curtains, to watch who came and went out of the restaurant every night. They were finally able to pop the place for a mob hit when a bunch of guys came out one night carrying large black garbage bags, which turned out to be filled with body parts. Those were the days.

Thanks for another great piece James.

Is it just me or does Lanza's look an awful lot like the restaurant in the Godfather where Michael Corleone kills Sollozzo & McCluskey?

This guy is tight!

@ahoy - it does look like it, but it's not the location. i believe the restaurant is in the bronx.

but! fun fact: 6th st between A & B was turned into Little Italy for the DeNiro half of Godfather II. you can still see the fake old ad they painted on the side of the building that houses the Grape & Grain (6th bet B & C) for the long shots east in the movie.

And Pentageli was garotted in 7B.

if anyone has the deluxe DVD version of the Godfathers, there is a terrific "extra" that walks through all of that location shooting.

Sorry for the thread hijack.

awesome. i could read this guy going on forever

When is the "Out and About" collection coming out? Each interview is more interesting than the last. A reprieve from watching history being torn down and replaced by drone habitats. Jerry is a true EV treasure.

Such a great story told by a real treasure of this world. Lucky to have him living in this hood. These stories are all unique and full of true character - thanks for them. Great people who live as themselves...

Wonderful Story! A great East Villager too! Thank you!-

Wow - Great Interview ! and spoken only as Jerry could have,and all truth.
I'm fortunate to have him as a good friend these past 30 years -
George

Great interview. My husband remembers a distinctly uncomfortable meal at Lanza's in the 70s, when his Polish father was determined to take him there. An unforgettable experience, but they were clearly out of place!

Loved your October 30, 2013 comment about the old Lanza’s James. During the early 1970s, when I was living on East 14th street, I caught up with Duane Jones, a friend from college in Pittsburgh. Duane lived on East 9th. People might know Duane from the movie Night of the Living Dead. He was the African-American guy trapped in the farmhouse hiding from the zombies. Anyway, we made plans to have dinner at a local Italian restaurant, and chose Lanza’s, which looked like a good place to eat. Despite this, the restaurant was oddly empty, except for a table of Catholic nuns and a table with a several guys in suits towards the back. However, we didn’t think much of this as we, a black girl and guy, caught up on hometown news. A year later, when I recommended Lanza’s to a group of local colleagues, eyes widened, the conversation hushed and they asked about my experience. All I could say was, meal was great.

Looking in from Kyoto I am glad to see/hear my Uncle Jerry is still as intriguing as ever! His voice sounds strong indeed. I remember well the visits to his home and studio as a child- never a dull moment when hanging with Uncle Jerry and Aunt Dori! Amazing, quintessential New Yorkers who have touched many lives, mine included.