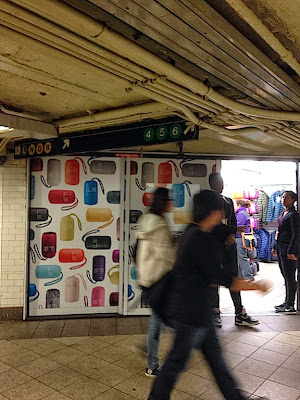 I read about this last week... but just saw it for myself tonight... last Thursday, Uniqlo opened a pop-up shop selling puffy jackets and non-puffy parkas in the Union Square subway station ... part of a new MTA program to bring businesses into vacant retail subway spaces.

From the official MTA news release:

The shops will receive month-to-month leases from the Metropolitan Transportation Authority for small retail spaces that are temporarily vacant while the agency is arranging long-term leases.

The pop-up store initiative allows small entrepreneurs, online businesses and established corporations to rent space in generally “as-is” condition to provide high visibility exposure for products or services where the emphasis is on displaying merchandise as much as actually conducting on-site transactions. In some cases, retail customers would be encouraged to make their purchases online or at larger stores off site.

“Pop-up stores will provide a fresh and beneficial element to our stations while also improving the image and desirability of retail space in the subway,” said MTA Chairman and CEO Thomas F. Prendergast. “This is another example of the MTA working to make better use of its real estate portfolio and improving the subway environment for customers at the same time.”

The store will be open through the December holidays...

Soooo... what kind of pop-up shop would you like to see from the MTA in the future? (To get you thinking about it...) Egg shop? Zine store?
Posted by Grieve at 8:08 PM

i'd like to see some mom and pop stores with a long life. perhaps helping stores that were displaced by the out-of-control commercial rents landlords charge these days.
these pop-up stores fit right into our temporary and disposable society and are really just another place for tourists to christmas shop.

froyo in a hoof!

I'd like to see a store selling just crow feathers and nothing else. for reals.

Stuff you can use in the subway

How about transit-related stuff like a nice dispaly and assortment of bus and subway maps (which sadly the clerk booths are usually out of), metrocard holders, street maps, metrocard purchase kiosks, audio walking tour thingamajigs, books about the subway?

isn't there already a zine store in a subway station in brooklyn? or did i dream reading about that a few months ago

A gun shop or a citibike rack.

Yes! The Newsstand was a pop-up shop last summer at the Lorimer St/Metropolitan Av station.

I like a bodega/newsstand in the subway or maybe a shoe repair, old school coffee counter or the NYC theme like the other commenter said- that would be useful