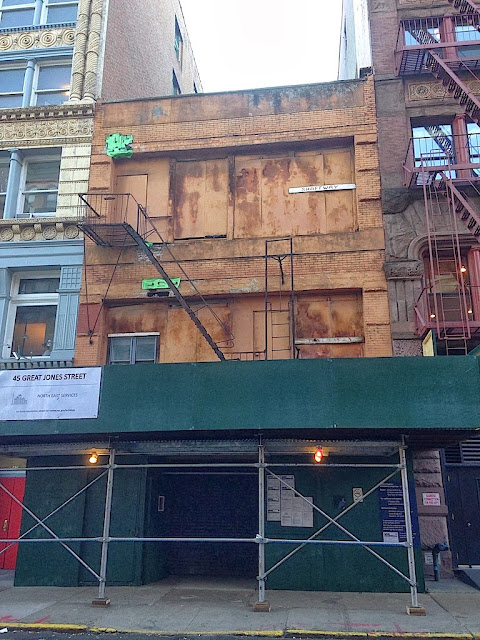 Plans have been in the works at least back to 2007 to add extra floors of residential above the landmarked 45 Great Jones St., the longtime home to the Great Jones Lumber Corp., between the Bowery and Lafayette.

There are demolition plans on file dated from Thursday. Per the usual all-cap DOB style: "DEMOLITION OF THREE STORY STRUCTURE. PER LPC, FRONT FACADE TO REMAIN." 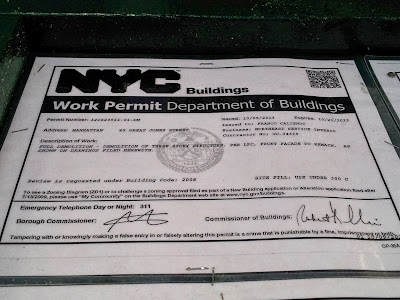 The Landmarks Preservation Committee OK'd enlarging the Romanesque Revival building by five floors back in July 2012, as Curbed reported.

These are older plans from June 2012 (we have not seen the final renderings) ... 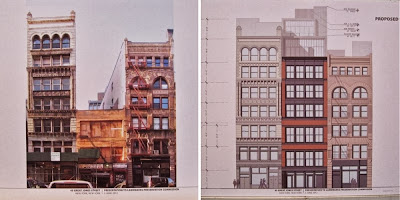 Building owner Joseph Lauto also ran the lumber business. (He worked at the lumber yard as a kid dating to the late 1940s.) In March 2012, he told The Local that the changing landscape of NoHo contributed to his decision to develop the building.

"One of the reasons we merged the businesses was because forklifts and trucks moving lumber had to stop because of baby carriages," he said. "We never had that before."

The ground floor will remain a commercial space while the subsequent floors and penthouse will be residential. The plan is still waiting approval by the Department of Buildings, who last passed along a "disapproved" in July, according to city records.

I have to feel bad for the people who live in the neighboring buildings. One day they have sunlight coming through their windows and the next day all they see is a brick wall.

One by one these 2-3 story 1920's commercial building are biting the dust. They are truly the step child of New York's architectural history and nobody seems think they are worth saving. I have also enjoyed the clever use of bricks on these very simple and modern buildings. I know we cannot save every building in this city but someday historians will wonder why there is not one example of this functional style in existence.

Don't feel too bad for them, no one lives there who is poor.

yes, no one who is not poor deserves sympathy for any reason.

Sad that they had to stop being a vibrant business bc of fear of strollers...We will soon have a padded, "ultra safe", kid friendly city where we make nothing at all, just consume.
Crazy idea: people with strollers be careful when passing businesses that get deliveries