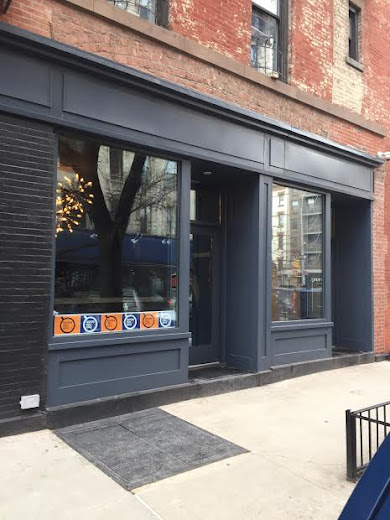 Here are details via the Southern Cross Coffee Facebook page:

The cafe is open from 7 a.m. to 10 p.m. They do have a website, though it's still mostly under construction.

Jamie the check-cashing guy previously worked from this storefront before the renovations. The other two spaces remain on the rental market.
Posted by Grieve at 4:07 AM

I'm sorry but that name evokes the KKK every time I see it.

How many coffee places can survive in a 2-block radius...

I wonder how many potential names for a coffeehouse, exist in the universe?
Pick one.
Great choice. /s

Global warming will take care of the abundance of coffee spots soon enough.

What a bunch of negative comments before even trying the place. I'll give them a try.

Well I for one wish them luck. It's a nice addition to the block but I really don't know if we need another coffee shop. I'm not a big coffee drinker but I'll be a customer if they have good croissants. Plus they kept that vintage tile floor (thanks for that!).

The name evokes the Crosby, Stills, & Nash song for me so...(also, agreed, there are a lot of coffee spots in the neighborhood but good luck to them nonetheless).

Totally agree. Clockwork name was obviously a dog whistle but this is fine. Cosmic even.

I immediately thought of the CSN song as well. Brings back pleasant memories.

Actually the rental unit to the left of Southern Cross Coffee has been rented to a NYC based pet accessory company called LoveThyBeast. They are supposed to be opening sometime in april

This is jut a bad spot for a coffee shop. It's tiny and the entire block is cop cars driving around and it's not exactly relaxing. The spot on the corner would be way better but I assume the rent is even more astronomical than this space was.

Au contraire Eden Bee. This block is much more than just "cop cars driving around". To the east of Southern Cross is an antique store, a toy store and a hairdresser (each with their own type of charm) and across the street are two excellent restaurants - Soba Koh (Asian cuisine) and Risotteria Melotti (delicious risotto). We have a vest pocket park that gets great sun in the summer and beautiful trees but most of all this is a real neighborhood block where many of the residents know each other and chat in the street. And quite frankly I like the energy of having the 9th Precinct on the block. I don't think most people live or visit New York to relax.

No need to school me about the block. I live on it. And worked at gimme gimme records. Which many had issues with because irs the cop
Block. They closed. We will see how they do. I bet they close within a year. Sorry but people do go to relax at coffee shops and work on their laptops. Just go hang out at the bean on east 3rd for a night or two. Thanks for the virtual you if what I see out my window right now though. You make it sound pretty nice!

It would be nice if this place could evoke the feel of the sadly gone Podunk: friendly, community-minded staff, good background music, a place where patrons actually speak to one another instead of being glued to their laptops. I so much miss a place where neighbors mingle and become a community. I live on 5th street also but cannot patronize Coffee Project or Pour T for neither is a place to relax and enjoy a cup of coffee or bite to eat.

The place is really tiny. Went by yesterday and there are two tables and it's really awkward inside. I guess it's more of a take out place though they want people to sit down and stay. Also, it's really dark in there as the lighting is a huge hanging chandelier for some reason. I could barely see the menu and i was the only one in there at 5pm...The Bean is always packed and has vegan stuff and is great for people watching so I went there. They also have a Laptop Free Zone in there.
Not their fault the new place is so small but it's kind of ridiculous. It's cramped and really uncomfortable and there were arrests being made right outside and it was noisy as hell. They may get some business from the 9th though being so close and all...That corner space could be something fun. But another coffee shop would be insane so....
I miss the check cashing...sigh...

It's me the Glass Half Full person. Not a coffee drinker but went in for a pastry. They had a great selection. Opted for an almond croissant which was delicious. Had an interesting convo with the "barista" about custom tea blends. I'll definitely go back to try the apple pastry and the waffle "things". It's really difficult to get a decent croissant in the neighborhood so if for that selfish reason alone I hope they succeed.

Yes I miss Jaime too but he's not coming back. I heard he's working at a Home Depot.

They won't succeed it's empty all the time. I can see the place from my fire escape. Like it has been said already. Bad name. Bad spot. Bad lighting. Horrible view of cops racing up and down the street. People passed out in that lovely park you described where lots of drug deals go down. About four got arrested today. Wasted and one was threatening a cop whom I'm friends with.
I like this block as much as you do but for opposite reasons. It's filthy. Full of crazy people. The cops bringing people in who are screaming Fuck the Police and how they can't detox in jail they will die there is a nice bonus. Having squatted on avenue C for 15 years I enjoy the insanity of east 5th st. I am friends with most people on the block and we sit and people watch as there's a lot of insane shit going down all the time. But not the kind you want to watch working on your laptop in a teeny coffee shop.
But that place has nothing unique about it. Nothing you can't get anywhere else at a bigger, brighter place where you can actually speak without the entire place hearing every word you say at the two tables they have. Now they've taken to flyering so people know they are there. I feel kinda bad for them but not bad enough to sit in there.
If they are nice folks I wish them the best. Not their fault they picked a bad spot for this.
The restaurants next to me you spoke of took a loooooong time to succeed with dozens of places failing before then. The rissoto place is pretty new and that and the Japanese one which is sort of on the new side too are specialty shops. A cofeee shop with a chandelier and a small generic menu is not. Dozens of places have tried and failed on this block. The Krishna juice place just closed this week. I watched them take it all apart. They lasted maybe a year?
The only business I was happy to see go was that burger place that was next door to me. I forget the name so many passed through. Just plain folks or something? Common burgers? The owner kicked my dog for trying to lift his leg on their illegal sidewalk sign they had in the middle of the street. My dog had cancer at the time and was dying and it was obvious. I was in the middle of yelling at him for hurting my dying dog when my huge husband walked up and flipped on him. Told him if he so much as looked at our dog junior again he was a dead man. Then he said in six months you will be closed anyway. And he was. We told people on the block what he did and I think that was part of it. But maybe it was just a bad spot for a burger place. But that guy didn't last a year. And we sat there with our dog laughing as he shut down. People who did eat there later told me the vibe was so bad and desperate in there it was a big turn off. But I like to think my 5th st folks saw him kick a dying dog and simply refused to eat there.
That's a thing I do like about this block. Though a few of the old characters passed away last year whom I loved there is a comradery here for sure. The 9th helped me with a stalker I had too.
However besides living in a squat my favorite block to live on here was east 9th between 1st and 2nd. That's an amazing street full of life and probably lots of rent control cause I see all my old neighbors there still!