Raphael Toledano-owned 97 2nd Ave. is on the auction block 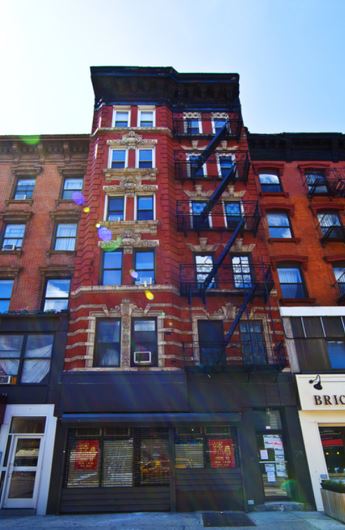 The 6-story, 10-unit building at 97 Second Ave. between Sixth Street and Fifth Street was one of the first East Village properties purchased by Raphael Toledano.

Now the building, which has a complicated recent history (there was a lawsuit in 2014 involving Toledano and another broker), is on the auction block.

Here are the details:

Secured Party reserves the right to reject all bids and terminate or adjourn the sale to another time or place, or to effectuate a private sale instead of a public sale, without further publication, and further reserves the right to bid for the collateral at the sale and to credit bid by applying some or all of its secured debt to the purchase price. Interested parties who would like additional information concerning the items to be sold at the sale and the terms and conditions of the sale, including the eligibility requirements to be a qualified bidder.

Public records show that Toledano paid $4.95 million for it in April 2014.

In 2014, Douglas Pratt, whose family had operated the longtime laundromat here since the early 1970s as well as owned the building, said that they needed to sell "for a host of personal and business reasons."

The retail space is now home to Hou Yi Hot Pot. They have a lease through February 2030.

Earlier this month news broke that, facing foreclosure, Toledano was selling off most of his East Village properties.
Posted by Grieve at 4:30 AM

It's a fire sale. He's not going to make any money. Look at the listing--this is an auction of a distressed property. That means this is a forced sale by the mortgage lender in order to come up with money Toledano doesn't have. He said he would never sell any of his properties, now he doesnt have a choice since apparently his business plan is falling apart. That's assuming he ever had a business plan in the first place beyond "I'm friggin' rich!"

This isn't a distressed property. It's collateral for distressed debt, but the asset itself is more than healthy given the location, number of apartments and commercial tenant. The Secured Party can keep the P+I on the note plus expenses, but are you telling me this building won't go for over $5MM (particularly with a 13 year commercial lease on the groundfloor)?

He's sold tons of his buildings and made a boatload of money. Thinking otherwise is just wishful thinking. Go back and add up his sale prices, now subtract what he paid (or at least borrowed to buy) for them.

He's coming out of this rich as shit and this will just embolden the next SOB to do it all again.

I have found in the NYC area that most foreclosure sales either are cancelled, no one bids above the price the secured party is owed and the secured party rejects the bid, or it sells for near market price. Just my experience. This will be an interesting one. BEcause I think this is a desirable building in decent shape. I miss the launderette.

It would be great if the tenants were able to buy it. That's assuming they're interested and possibly living in an alternate universe.

This scumbag has probably come out a bit ahead on selling his EV portfolio... But, what most folks here aren't thinking about is that he also paid $41.5MM for a place on West 16th street that he has gotten completely destroyed on. From what I've heard, he couldn't get a single rent-stabilized tenant to move out from there!! That one stupid move totally killed him!!!! Now he's being forced to sell everything!!!!

The people heaping praise on this high school dropout are the same kind of people who admire con artists like Martin Shkreli. Some people will sell their own integrity for any price, but when it comes to real estate there is no profit worth making peoples lives unlivable, ruining neighborhoods, kicking people out of their homes, and making housing even less affordable for everyone. Lets see how many "admirers" are left when this guy goes bust. My guess is he will have fewer fans than Bernie Madoff, and a lot less money.

This scumbag has debts ,lawsuits and hard money lenders after him .I dout he will end up making much more than the bad karma he just produced for harassing his tenants and businesses . Good Ridance POS ...

Do you see anyone heaping praise here? Try reading.

By definition this is a distressed property because apparently the owner can no longer pay the debt. This is a fire sale. Tolerando's properties are going into foreclosure. He is forced to try to sell this one to pay off his debts. Maybe if he had finished 9th grade this wouldn't be happening. This is a disaster.

Not a single person on this board has said a positive thing about this guy. I'm getting tired of this "Fake News" crap.

Why are you assuming? The auction listing says it is a distressed property. Yet people are still saying he's going to make money on the sale? That's not how this works. There is obviously a problem here or it wouldn't be up for auction as a distressed property. This is not how you sell real estate to make a profit. This is how you sell real estate to fix a financial problem.

@11:42 am. I see plenty of commenters here saying how he's made a boatload of money off of these real estate deals. I see a guy who dropped out of ninth grade and who iis losing his ass on real estate deals he doesn't know how to manage and can't afford. I guess this is the Donald Trump school of real estate. Stop enabling these people. Their egos are big enough.

I'm the guy saying he made a lot of money on these buildings (and calling him an SOB). Not sure how that is praising him.

He's not losing his ass in real estate. How can he lose money if the value of his properties have increased over the last several years (which they have largely done because of his illegal hounding of rent stabilized tenants)?

It's all wishful thinking on your part.