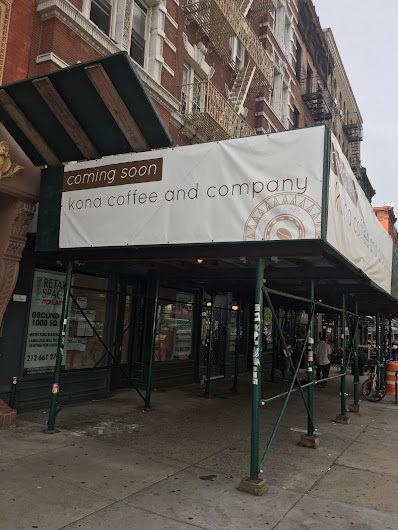 Work continues at 59 Second Ave., where sidewalk-bridge signage has arrived for Kona Coffee and Company here between Third Street and Fourth Street.

Don't know too much about this operation. Their Facebook account notes that their beans "come from small, family-owned farms in Kona."

This is already a pretty competitive stretch for coffee, with the Bean set up almost directly across the Avenue ... and the Coffee Project and Southern Cross on Fifth Street just off the Avenue. (Not to mention two corner delis.)

Until October 2015, the address was home to Alex Shoe Repair, whose lease was not renewed after the building's new owner Icon Realty bought the property in early 2015.
Posted by Grieve at 4:30 AM

Hysterical. Can't be any more signifying of this mentally lethargic and oblivious generation that there's another place to get coffee instead of a business that serves a true need.

although.....
we purportedly will embrace small business (and i do)
one coffee shop too many.....😀

The hardware store was a great family business, which ran a computer supply on the side. I doubt Kona will be a compensatory substitute.

These coffee businesses -- multi-chains though they profess to be family based -- are mirror images of these multi-portfolio shell real estate conglomerates.

If they are using Kona coffee, this has got to be one of the most expensive cups of coffee around.

And if you want Kona coffee in bean, from a local roaster, and a family business, visit Porto Rico on St. Mark's, for christsakes.

I guess it's too much to hope for to expect a new business that sells useful things—like, uh, hammers and wrenches.

This is why it's a good thing there are websites like Brandless, where everything is $3 and they even sell coffee!

What are these many, many, many coffee places gonna do when, if the warnings prove true, the coffee crop is decimated and we no longer have it to drink?

Oh right, full liquor license. What was I thinking?!?

i miss those narrow stores all over the neighborhood, on avenues and crosstown streets, that had a coffee counter that served bagels, toast and numbers along with cigaretts, candy, nespapers and school spplies.
coffee was under $1 anf they knew your name,
they were warm in winter and cool in summerl opened early and closed late.

Meanwhile, what I really miss is Podunk - tea, for sure, but a wonderful atmosphere and part of the fabric of the neighborhood. In case you are looking for the new iteration of Podunk, go to Pink Moose @ 58th St & 1st Ave.

Boycott any business that chooses to rent from a terrible landlord like Icon Realty. I live in the neighborhood and can make my own coffee. How about a hardware store?

Not all coffee places are alike. Equating a new coffee place to The Bean is akin to equating a new restaurant to McDonalds. The Bean has the worst, old, over-roasted, low quality coffee around but charges the same prices as everybody else.

There's a hardware store on First Avenue. As a pleasant dissenter, I say yay coffee. It makes the grinches on the EV a little happier. Hopefully, the service will be better than Coffee Project.

I’m sorry but this is a family business... please don’t go say such things without knowing the full story