Amid claims of being a rent-stabilized tenant, Raphael Toledano faces eviction from his home 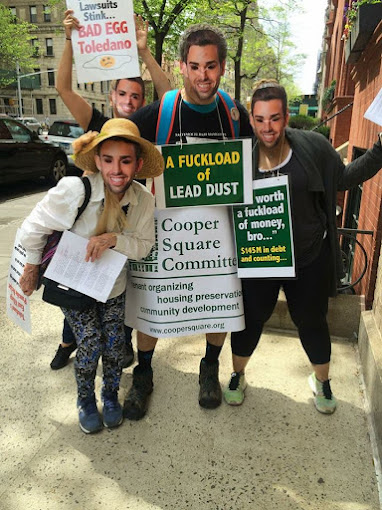 [Photo outside Toledano's apartment building from May]

The Real Deal has the story:

Hyperkinetic landlord Raphael Toledano, whose alleged methods in evicting tenants from rent-stabilized apartments made him enemy number one of the New York City tenant movement, faces eviction at his $13,800 a month Upper West Side home, where he claims to be a rent-stabilized resident, court records show.

“This has got to be a joke, right?” said SaMi Chester, a tenant organizer at the Cooper Square Committee who actively works with tenants in Toledano’s buildings; they frequently claim they are being harassed by the 27-year-old landlord. “Here’s a guy who’s built his career on screwing over rent-stabilized tenants. Now he’s doing that?”

Toledano, who recently filed for bankruptcy on a portfolio of multifamily buildings in the East Village amid claims he was overleveraged, essentially operated a real estate business whose model depended on vacancy deregulation to crank up rent rolls.

East Village tenants pay landlord Raphael Toledano a visit at his Upper West Side home
Posted by Grieve at 4:05 AM

This. Is. Hilaroius. What happened to the building where he said he was going to live forever? Did "forever" mean less than a couple of years? For a guy who cant be more than 4 feet 12 inches tall, he sure is a giant when it comes to creating scandals. Rafi can always go rent from Croman, who will soon be living on Rikers Island for his own financial indiscretions. I'm sure CroMagnon has a few nice apartments available, as long as you don't need cooking gas or mind a little toxic dust from the renovations. This is too funny.

For such a young guy, he sure has created a lot of trouble and made a lot of enemies. In that sense he is an overachiever I guess. LOL.

I'd laugh, only I know how many lives this POS has ruined. Judge needs to put this guy away.

This is almost unbelievable. Like he is a lying POS. I still think he is getting away with millions of $'s.

He'll have free rent if they'd send him where he *should* be going: prison!

And yes, Donnie, I agree he's still probably got $$$$ stashed away somewhere.

Lowlife sociopath. Total failure. He just wants the attention for his outlandish verbal diarrhea, that's all he has left, the attention. Let him burn out.

This is just like those google shits with their vending machine. Looking for outrage to promote themselves and their plundered concept. And that goes for that broad with the bullet wall in Crown Heights.