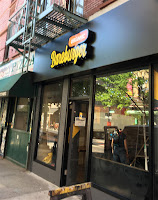 Bareburger will be in soft-open mode today ahead of its grand opening tomorrow at its new LES home — 173 Orchard St. just north of Stanton Street.

Matt Kouskalis, who owns and operates a handful of the city's Bareburger outposts, said that they'd be starting delivery service tomorrow as well.

The regional all–organic burger chain left its six-year-old home at 85 Second Ave. at the end of April.

Kouskalis told me back in February that escalating rents at the East Village location prompted the move to the Lower East Side.

Moving day for Bareburger
Posted by Grieve at 4:05 AM

Email ThisBlogThis!Share to TwitterShare to FacebookShare to Pinterest
Labels: Bareburger