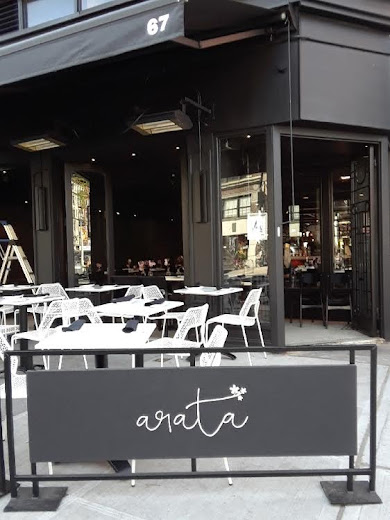 Florence Fabricant at The New York Times has a preview of the restaurant on the southwest corner of Second Avenue and Fourth Street that "highlights the diverse and abundant plant-based ingredients of Asia":

Arata, which has sleek, minimalist décor, will serve kimchi pancakes; several salads; rice cakes with long beans and sugar snap peas; tempura mushroom hand rolls; and steamed buns with mushrooms, eggplant and other fillings tucked inside. Assorted ramen and udon bowls will brim with ingredients like chickpeas, smoked tofu, Sichuan tempeh “sausage” and baby bok choy. A cacao matcha tart is one of the desserts.

Kenney is also involved with 00 + Co. and Bar Verde right next door on Second Avenue. And in March, Kenney teamed up with Pure Green to launch PlantMade, a cafe on Second Avenue between Ninth Street and 10th Street.

This corner space on Second Avenue and Fourth Street has been four restaurants since 2012 — La Contrada ... Contrada (not to be confused with La Contrada) ... Calliope and Belcourt.

Previously on EV Grieve:
Matthew Kenney bringing yet another plant-based restaurant to 2nd Avenue
Posted by Grieve at 4:00 AM

Good thing Arata doesn't have the letter C in its name, or it, too, would go down in flames. Seems to be the common thread in all the other names!

Matt Kenney opening up a new restaurant every week. Actually looking forward to trying this one.