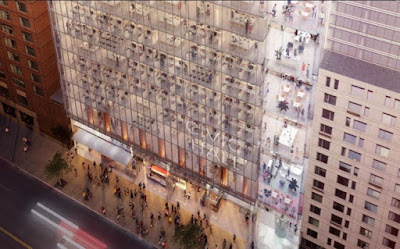 The proposed tech hub at the site of the now-former PC Richard complex on 14th Street at Irving Place is making its way through the city’s Uniform Land Use Review Procedure. Back on Friday, Manhattan Borough President Gale Brewer's office released her recommendation (see more on that below).

The application now moves to the City Planning Commission before a deciding vote by City Council later this year.

As previously reported, the 21-story building would house a digital skills training center, flex-office space for startups, market-rate office space and a food hall, among other things.

To make this happen, the site/area needs to be upzoned. This zoning change is of particular concern to some area residents and preservationists, who have stressed that the fabric of the neighborhood could be lost with a large number of out-of-context new developments south of Union Square along Broadway, University Place and Fourth Avenue.

The Greenwich Village Society for Historic Preservation (GVSHP) has been leading the efforts behind a rezoning of the area to enforce some height restrictions and affordable housing requirements.

Now GVSHP officials have just learned that the city scheduled the next public hearing for tomorrow afternoon — without any actual public notice.

Here's an email via the GVSHP:

Last Friday, Manhattan Borough President Gale Brewer released her recommendation on the proposed 14th Street Tech Hub, as part of the required public approval process. Brewer initially pledged not to include the need for neighborhood protections to accompany Tech Hub as part of her recommendation, as GVSHP and many others have called for, calling them “unrelated.”

However, GVSHP worked hard to persuade the Borough President that the Tech Hub without neighborhood protections would accelerate rampant overdevelopment in the University Place, Broadway, and 3rd and 4th Avenue corridors, as did thousands of neighborhood residents who wrote or called her. Following this, Brewer issued her recommendation (read the PDF here) including mention of the potential impacts upon the adjacent Greenwich Village and East Village neighborhoods and the need for neighborhood protections, as GVSHP has proposed and called for.

Outrageously, directly following this, the City scheduled the sole City Planning Commission public hearing on this matter for this Wednesday, May 9 with virtually no public notification (as of this morning, the city’s own Land Use Tracking System had still not shown that the City Planning Commission hearing had even been scheduled). Adding insult to injury, this item is scheduled as the LAST item on a long agenda for the day, making it virtually impossible to say how late in the day this item will be heard.

DON'T LET THE MAYOR CUT YOU OUT OF THE PROCESS FOR DETERMINING THE FATE OF YOUR NEIGHBORHOOD!

You can read more here.

In late February, CB3 approved a land use application to create the tech hub. In doing so, CB3 also included an amendment in their resolution calling for zoning protection.

Food hall??? I suspect you people are saying stuff just to seem cool in the eyes of millennials or whatever. GTFO with that nonsense.

"As previously reported, the 21-story building would house a digital skills training center, flex-office space for startups, market-rate office space and a food hall, among other things."

In other words, it's exactly like all of the other buildings like this. If they are successful at building this mecca to monotone tech culture, we can kiss goodbye any diversity that is left in this area.

I really have to laugh at "progressive" Mayor Bill. The only diversity this sad sack believes in is income: Wealthy, wealthier... and you guessed it... wealthiest. And he gets away with it because of ONE PARTY RULE. No debate. No stopping him.

This is being rushed like this because a judge demanded full disclosure of his emails and texts with the aforementioned agents and their aforementioned developer overlords, who are undoubtably behind this lame east coast Silicon Valley homogeneous tower plan.

The mayor does not give a fuck, cmarrtyy is dead on, he cares on about the three wealthy's than he does about the forgotten middle and lower classes of this city (this is what happens when you don't show up to vote). A good example is his horrendous decision to fund 300 mil to those damn ferries that actually cost the city twice the amount to have them running instead of allocating 200 mil for discounted fare cards for all that have over one hour commutes to work in the city.

Why should people who "have over one hour commutes" get cheaper fares? If anything, since they use the system more, they should pay more!

De Blasio is proving yet again what a sleaze he is as mayor (and as a person). He is one of the ultimate empty suits.

Where is ANY consideration for the actual residents of this area? There's NONE!

I hate the idea that our neighborhood is seen as "ripe for the picking" (which I expect of developers) - but to have the mayor *so* willingly facilitate us being plucked over is beyond outrageous.

It seems that with Trump, Cuomo, and De Blasio in charge, the "rule of law" is MEANINGLESS, and we're all just here to be screwed over by people who only value the $$$$$ in their bank accounts. These are people who laugh at the idea of "NEIGHBORHOOD".