Amped up: Bands get the boot from Tompkins Square Park for not having sound permits 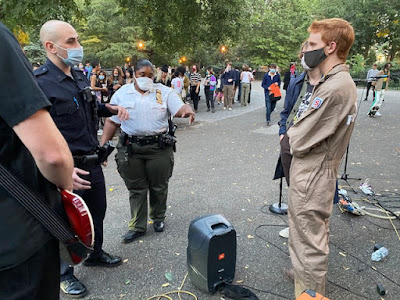 A promising triple bill of bands got the boot from Tompkins Square Park last evening.
EVG reader Chris Ryan shared these photos... the three bands (and check them out!), the Employees, Hello Mary and Clovis, arrived to play an amped late-afternoon show without a sound permit.
According to Ryan and several other witnesses, the NYPD and the Parks Enforcement Patrol showed up after while, and eventually shut down the show (they apparently let the bands continue playing for nearly 30 minutes before stopping it)... 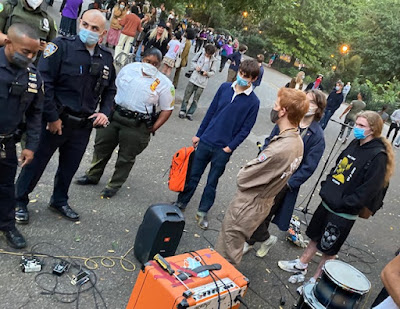 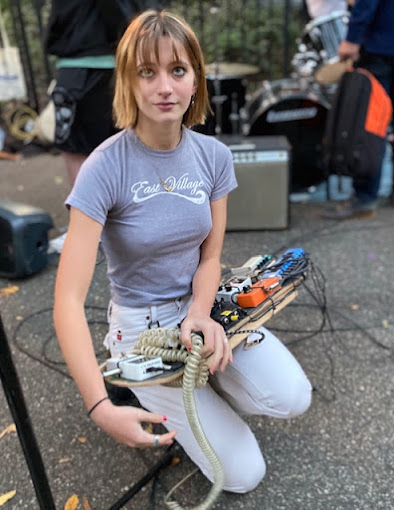 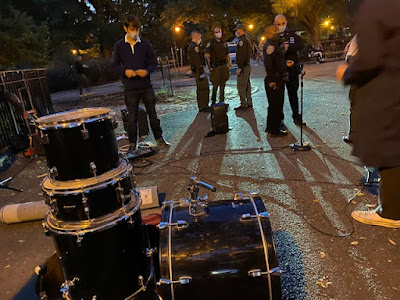 Ryan said the officers explained that the bands must have permits to play amplified music. (Ryan offered to put the bands in touch with Chris Flash, who has organized free shows in the Park for years.)
There have been reports of "an intermittent crackdown on amplified performance," as amNY put it, in Tompkins Square Park.
As Ryan said: "Hopefully, this not the end of the resurrection of live music in the Park."
Posted by Grieve at 1:00 PM

I've been enjoying the live music in the park this summer but lately it seems like it's been a free-for-all with bands simply showing up and playing whenever they want. I'm pretty sure that permits only allow amplified music until 6pm so even if the bands yesterday had gotten a permit, they only would have been able to play for a short time as they didn't start until around 5 or 5:30. Later, around 10pm, the White Claw-swilling/NYU/no-mask/non social-distancing crowd from the other week started showing up, along with the same DJ rig as before but things never got going. Not sure if it was the same cops/parks department people who told them to get moving but a cop car drove through multiple times.

what is it with white claw? Is it featured on some netflix show?

this is too bad for the good actors that while they may not have permits did their thing with decency and respect, the park entertainment has been a godsend during this horrible summer of bros woo hoo's and general mayhem in the hood
good that they shut down the night rave and hopefully they'll fast track permits so that we can enjoy the multitude of great music in the park for the next couple of weeks of decent weather

I am angry. I walked through the park yesterday and discovered this super spreader event. NO social distancing and NO masks worn on anyone in these close clusters just dancing the evening away. Are we living in two separate realities? To my knowledge, a pandemic still exists with the numbers climbing up again. Oh let me guess? It's a hoax. Different rules for different people? Bullshit. I don't care how young or anxious people are, the rest of us don't wish to fall ill or die. And, no. I am not an old fart with an axe to grind. I am in my early forties, who wants youth to have fun, just not at the expense of others. I wish they respected what is happening in our society and to our beloved city. Peace out.

Passed by on B tonight at 11:30, and quite loud dj music came out from the dark park. No idea if there was a crowd inside or not.

Last night there was also a huge party at 442 east 13th rooftop.. went all the way past 4 am. You could hear it for blocks. At least a hundred people and their own security at the door. Cops came by and did nothing. This shit is out of control

In the park this Sunday morning there was so
Much garbage. Near the entrance to the grassy section there were Tons of trader joe’s bags and....you guessed it, White Claw cans!

Such nice mornings in the park and it’s so depressing that people can’t just put their garbage where it belongs.

The weekly NYU Coronavirus Superspreader DJ party has led to a crackdown on musicians in general, even jazz musicians using small speakers are being harassed. The trick is to start the event in the park as late as possible. Last week in Washington Square Park there was a burlesque troupe complete with an emcee, amplified music, a chrome stripper pole and a Cirque de Soliel style giant rotating circle device. They did a striptease act which back in the olden days could be seen daily in Show World Center in Times Square. It was as if Robin Byrd herself had brought her old Channel 35 cable TV show out to the park, and since it was late there were no Park Police in sight. Meanwhile the police guarding the arch stayed inside their pen and did not interfere with the show, which was amazing.

Hopefully soon we will live in seperate realities. The virus fear mongers can stay in a place where everyone wears masks, and don't question things, and the rest of us can live in a world where we don't get treated like lepers just because we don't feel the need for a face diaper.

Please move to the White House where masks are not required.
You will be with great company.

Face diapers? Really? You must be a member of the GOP and an ardent Trump supporter. Now it makes sense.

@2:18 - COVID cases are starting to rise in NY. Keep going about not wearing a mask and you'll be in your own separate reality, hopefully not on a ventilator.

Yeah, that place you’re referring to is called hell. Where you and likeminded individuals will end up. Get a grip or get lost.

Anyone know the name of band that played whole set late Saturday afternoon—Oct 3 and yes gobs of unmasked kids dancing etc. not all NYU students either... lead singer says she plays every Saturday

There are hoards of people drinking white claw on the grass in tompkins that have nothing to do with the bands or art going on. They have no masks and they blast music long after any live shows end. They set up tables and sell red solo cups of beer and more. Call 311 on them if you must call them at all but the soon to come cold weather will end the park parties either way.