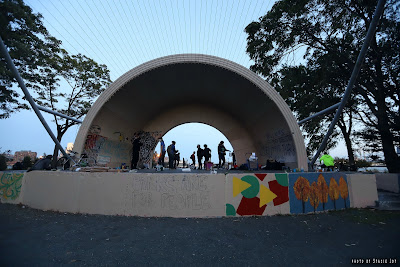 On Friday evening, a group of artists came together to paint the amphitheater in East River Park ... the Art Attack (first reported here) was a way to protest the upcoming partial closure of East River Park for up to five years as workers will complete the $1.45 billion storm protection project.
EVG contributor Stacie Joy shared these photos... including of organizer Ian Dave Knife... 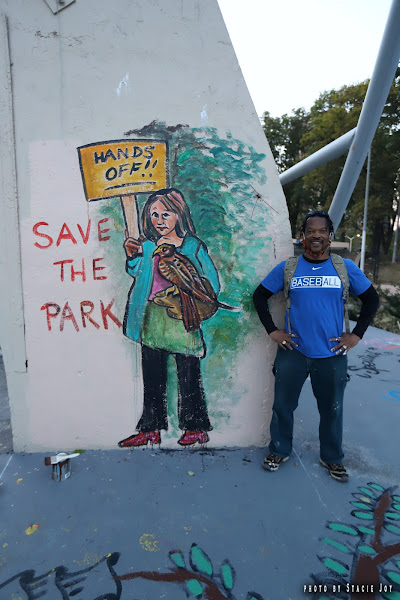 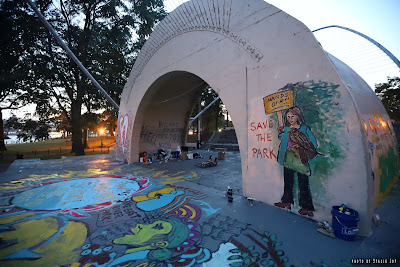 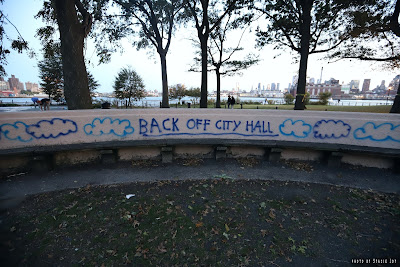 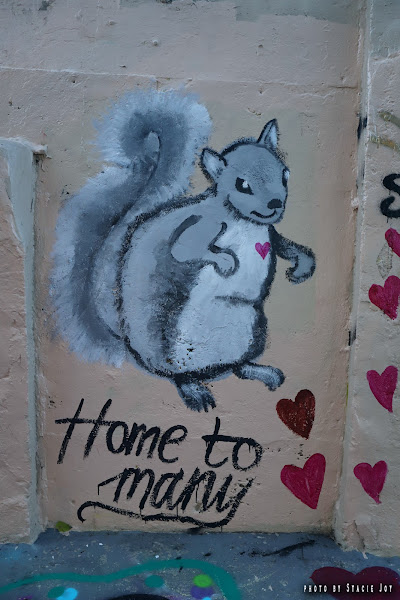 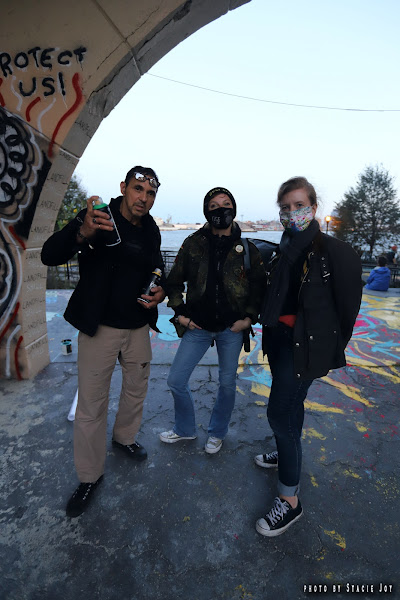 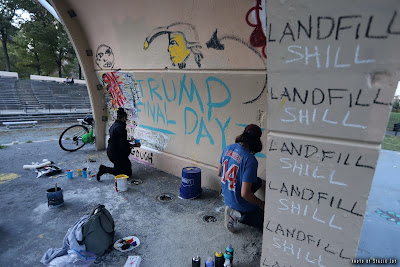 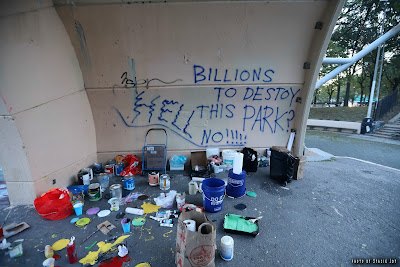 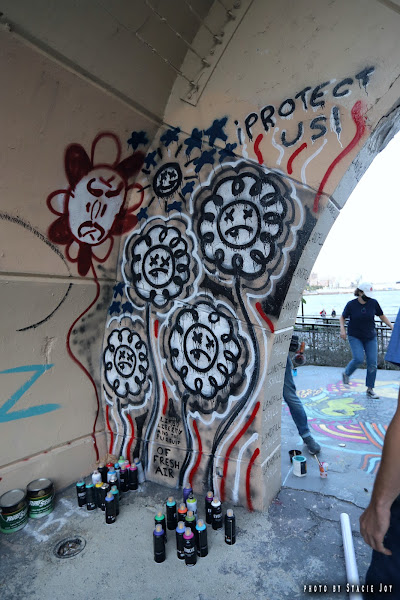 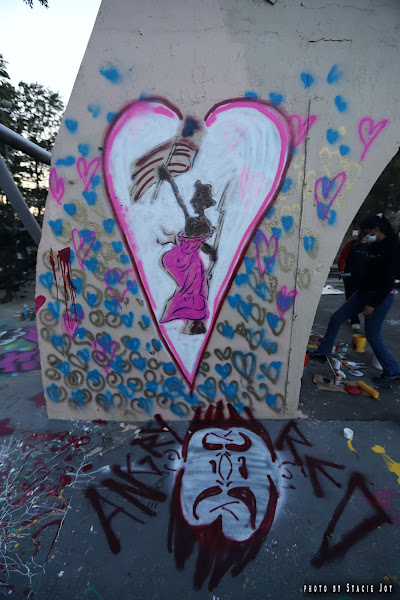 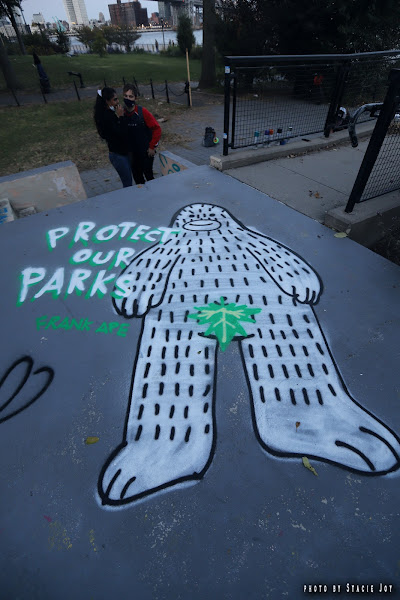 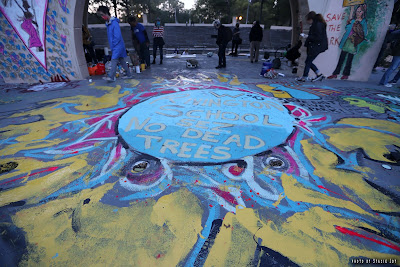 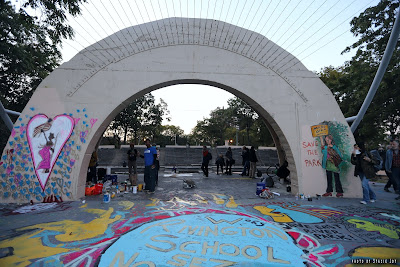 Postscript
The Parks Department swooped in quickly ... sending a team of power washers to the scene to blast away the art on Saturday. Park regulars were surprised by the response, given how long trash and needles and other items that need attention are often neglected... 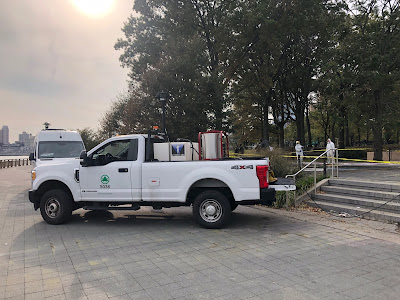 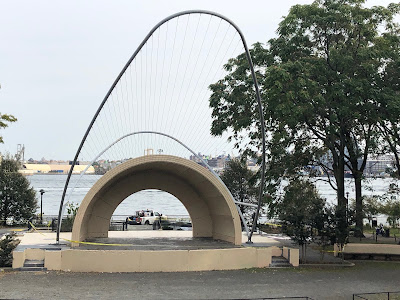 As previously reported: Last November, City Council signed off on the hotly contested flood-protection plan that will bury/elevate East River Park by eight feet as part of the East Side Coastal Resiliency Project. Construction is expected to start this fall.
You can read more about various community efforts at the East River Park ACTION website. You can find the city's East Side Coastal Resiliency Project website here.
Posted by Grieve at 5:30 AM

Why should Parks even care of they are closing the park in a month? What a waste of resources. And such beautiful art -- and message.

Shame on park workers. I agree trash everywhere and all they can do is remove beautiful/meaningful/true art?!!!

It's almost as if the Parks Department and city don't want people to know, or something . . .

This is a nice contrast to all the mask-less entertainment articles from this weekend. Glad to see there are a few people who still care to actually be a beneficial part of this community in this hood.

Isn't the construction that will level the Park now a done deal unless Cuomo issues an executive order since the Court ruled against the alienation lawsuit of the East River Park ACTION organization?

They let the weeds grow and the trash, including used sharps, pile up for weeks, but can race to obliterate this protest art in 24 hours? That's some BS.

What pisses me off is that the destroyed our art project before we can document it as planned, erased the work of many artists without giving us an opportunity as per Visual Artists Rights Act 1990 where they MUST give us 90 days to figure it out. They didn't want the message to be seen so they rushed to destroy our work and we need a lawyer now to sue for our work

How can the City afford to still pay for this project? The Covid 19 epidemic has caused a budget deficit of over 8 billion dollars. They have already issued furloughs to NYC employees and are still talking about over 20,000 layoffs. Where is the economical sense in this???

Hi, I don’t know what to make of this personal experience, so extend me some leeway here.
I left NY 37!!! years ago. As a young person I worked in the Parks system. I was Actually on the Graffiti Removal crew! Ironic considering I am an artist. But last night I dreamt of something I think related to your plight.

In my dream, my daughter and I were escaping the monstrous West Coast Fires and heading somewhere else to go to college. As I walked around a certain Park grounds I noticed a kestrel falcon or a hawk lying dead on the grass with some of the feathers ceremonially removed. When I awoke , I tried to check in with my higher consciousness about ‘what does this mean?’ What came to me was that’ something is dying in or around the East River. I know it is cooky but I started googling the East River today and I am Just learning this story about the potential destruction of the park! The first image that I saw was that art piece of a woman with a falcon or hawk alive and well on her arm!!

I don’t know what to make if this synchronicity, but I want all of you to know who are in this fight to save the park, that we are connected. Even the entire country apart, somehow your heart and prayers and wishes have reached through the mystery and tapped me on the shoulder. If you know who that particular artist is, please give them my story. And to all of you keeping the faith throughout these times. Thank you.. , your good works matter and will never be forgotten 🌹🌹🌹🙏🏽

The Dutch engineer gave them a plan thats modern and up to speed with today's technology and doesn't include destroying the park, the amphitheater that has hip hop history " the home of Wild Style"

The Dutch engineer gave them a plan thats modern and up to speed with today's technology and doesn't include destroying the park, the amphitheater that has hip hop history " the home of Wild Style"

I highly doubt the this art project will be protected by VARA as as no permit or informal agreement (such as 5Pointz) was granted beforehand. Secondly, "recognized stature" will be even more difficult to prove as this seems to be more of a political protest statement. But, hey, with a good lawyer $$$$, you never know.

Another terrible policy for our community supported by CouncilMember Carlina Rivers

This money is already in the bank and has been allocated for this specific project. This has no impact on the current financial crisis.

Does anyone know what date they're actually planning on starting? It's been really difficult for me to figure this out in all their documents.