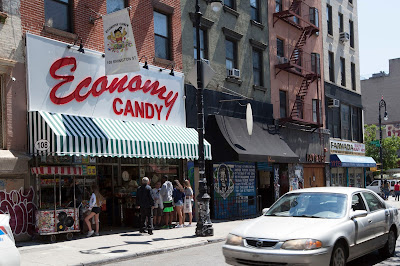 Hard to believe that Halloween is less than three weeks away ... and it's traditionally a busy season for LES/NYC institution Economy Candy, which opened in 1937.
Skye and Mitchell Cohen, the third generation of husband-wife owners of Economy Candy, told me that they've "done a fraction of the business" they would normally do had they been operating as normal over these last six-plus months.
"October is typically our busiest month of the year, with Halloween being our busiest day, but with trick or treating in hot water this year our forecast isn’t ideal," Skye says.
Back in March, when the PAUSE went into effect, they launched the CandyCare Pack.
"We were overwhelmed by the 'pay it forward' nature of orders that came in," Skye says. "We started recognizing names as we were printing out shipping labels and thought something had gone wrong. While looking into it we realized we were recognizing names because people who had received CandyCare Packs were ordering and sending CandyCare Packs to their friends and family and so forth ... in lieu of regular social visits, which were made impossible by social distancing measures."
So this fall, they've introduced a variety of Halloween CandyCare Packs, which are currently available on their website for curbside pick up or to ship nationwide. 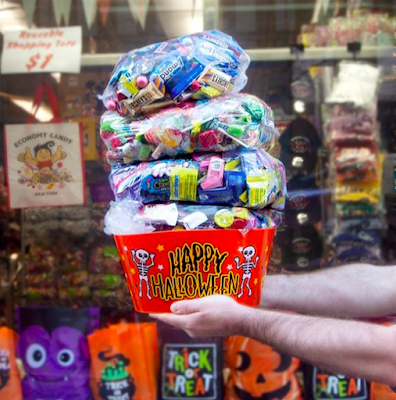 Economy Candy is at 108 Rivington St. between Essex and Ludlow. While the shop is closed for in-person shopping, they are open for curbside service. Find their website here for more details.
Images via Economy Candy
Posted by Grieve at 6:00 AM

I sent a care pack in the spring and just sent a Halloween pack to the same person, my 9 year old niece. Both gave me official ranking as the best aunt. I love Economy Candy.