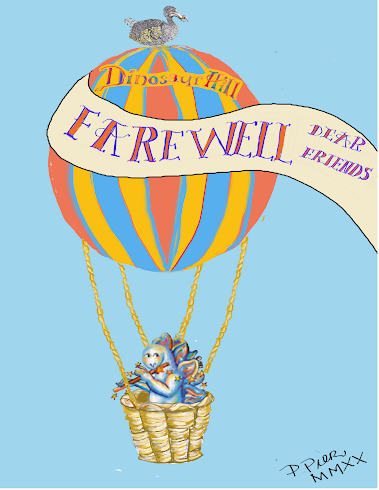 The jam-packed children's toy, game and book shop Dinosaur Hill, a neighborhood institution since 1983, will be closing at the end of November. Pamela Pier, the shop's tireless owner, has decided to retire.

This little-shop-that-could — many of its items under $5 — set the pace for the many of the visionary, iconoclastic stores that have opened on the East Village's side streets in the decades that followed.
A final storewide sale is already under way — 25 percent off through the end of October, 40 percent off in November.
Veselka, Dinosaur Hill's equally well-known next-door neighbor, will be taking over its lease, and expanding into the space here at 306 E. Ninth St. just east of Second Avenue. 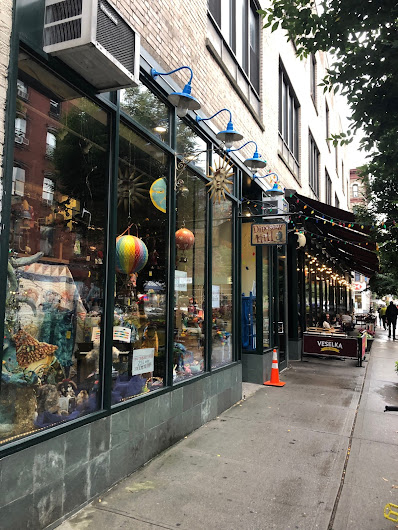 Pier, who trained as an artist and early-childhood educator, had a specific goal with all the old-fashioned wooden wheel-y vehicles, dexterity-improving games, science kits, pick-up sticks, xylophones, art supplies, soap bubbles, erector sets, hobby horses, books, stuffed orangutans, puppets, marionettes, a multiethnic range of dolls, and, as an afterthought, wearables, in her inventory. 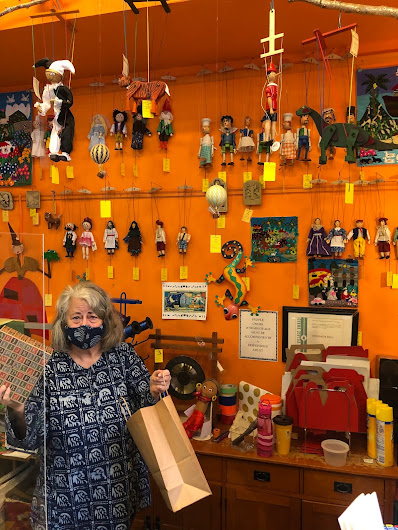 She wanted "to keep kids out of cyber space and engaged in 3D activities." Some items are produced by local artists and artisans. Other goods come from small-scale companies around the United States. The hand-carved cherry wood teething rings and rattles? They're from a supplier in Texas while the bass wood alphabet blocks, available in a variety of languages, are handcrafted in Grand Rapids, Mich. And still others come from around the world: marionettes from the Czech Republic … clothing items from India and a women's craft co-op in Ghana.
When Pier finally decided it was time to retire, she contacted Veselka to see if there might be interest in its expanding into the space that Dinosaur Hill occupies. The answer was yes! (This is not the first such negotiation Pier has had with Veselka. Some years back, she moved from another storefront in the same building to accommodate an earlier expansion the restaurant made.) 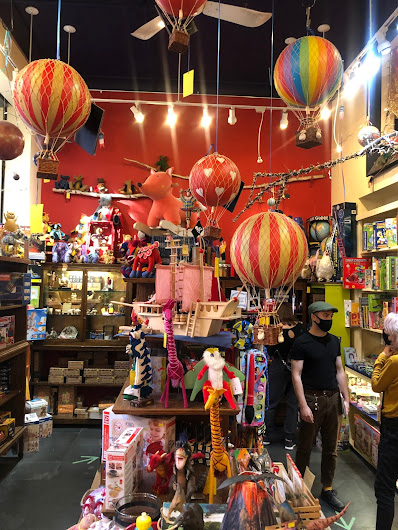 Meanwhile, her employee Karen McDermott and McDermott's husband, Jason McGroarty, plan to maintain Dinosaur Hill's legacy by opening their own East Village children's shop — with Pier on board as consultant. If the right storefront opens up, they’re interested.
But there's no doubt Pamela Pier and her truly unique Dinosaur Hill will be sorely missed.
--------
Linda Dyett is an East Village-based freelance writer and editor who’s been published in The New York Times, The Washington Post, Monocle, New York magazine and — back when glossy magazines were still magazines — Allure, Glamour, etc.
Posted by Grieve at 5:30 AM

Sad news indeed, shopped there for years for nieces’ and godson’s gifts (tbh a few for myself too), curated inventory and the best salespeople. Enjoy your retirement Ms Pier!

I've enjoyed walking past the magical Dinosaur Hill windows for decades. So many wonderful whimsical toys and games...I hope the McDermotts enjoy as much success.

Pamela, your store was as much a joy for childless adults as it was for kids. So many mornings spent picking out the right dino toy or glass bauble from the front. The curation was excellent, with many recognizable local artists. Your work created so much beauty in our neighborhood. Thank you.

noooo! i have bought so many wonderful toys here over the years! and back when i was a film student, i came in looking to buy some plastic ants to "star" in a short feature! she kindly let me have them for free—a big deal to an 18-year-old of limited means—and told me to let her see the film when it was finished as "payment." i will sorely miss this place but i wish the owner a happy retirement, veselka a successful expansion, and the employee's new store (which i will definitely be visiting) well!

Never had kids, none of my friends ever had kids, but would go by regularly just to stop and enjoy the whimsical and well-thought-out window displays, or actually go inside to breathe in the air of a different time. Thank you for the past 37 years, Ms. Pier - you will be missed, but enjoy your retirement. You deserve it!

In the 80s and 90s, every East Village kid loved that place and would beg to be taken there. No place was as kid friendly, or filled with toys and books that parents liked, too.

Truly sad. We wish the owners all the best in their retirement. They deserve it.

This store is reminiscent of the film, "You've Got Mail," where Meg Ryan's character sells children's books and toys in a shop on the UWS. Dinosaur Hill, much like the aforementioned reference, carries this magical, one of a kind environment, appeal and charm, where one can find unique items, and where guests are treated in more of a personalized way. The aesthetics also play a factor in one's overall experience due to the artwork and tapestry of the interior and exterior. You're not just supporting local merchants and artists, but you've arrived at a special destination which feels utterly indifferent to the other box and corporate chains whose products are made and shipped from a warehouse. I don't have children, but have purchased gifts here for my nephews and the children of close friends. This store is what contributes to our beloved EV and it breaks my heart to witness it's end. My best to Pamela in the next chapter of her life.

I Love this place! Pam is a sweet lady, most of the time working upstairs in her office. She has always had a nice staff. I've been buying gifts for my nieces, nephews,friends, even for myself, I still have that Rubix cube! It's been the Best place to get one of a kind gifts also, for Birthdays, Christmas or just for the fun of it. I will miss Dinosaur Hill and the Beautiful window displays! I Wish Pam the Best Retirement, you will be missed.

Oh man... she deserves to retire - of course! I hope that Pamela has a really really great retirement.

Growing up here, this place was utterly fantastic. I bought all my beanie babies there (haha) and it was/is just the best place for kids.

Dinosaur Hill is a staple of the east village and nothing can fill the void it'll leave. I really wish her, and the legacy of the store all the best!

wow so upset about this, guess childhood is over and time to face our awful adult realities, like the tech hub and shake shack. kill me.

will absolutely drop in to buy a puppet at the sale, and support the new version/business as soon as it opens. glad at least it's Veselka taking over the space. :((((((

Great store, absolute treasure in a time of Amazon putting toy stores out of business. Job well done and thanks for the memories!

Was a regular stop when my sister's kids came to visit from out of state, even as they were well into their teenage years. They were sad to hear this news as well. You can't really happen upon a yodeling plastic pickle, miniature rubber animals, or handmade finger puppets the same way online. Wishing Pam a happy retirement.

My son says it's one of the saddest days ever.

I stopped by this afternoon to buy another Dinosaur for my collection. And everytime I go there I see something new. There was plenty of customers, so make sure you go there before all those precious toys disappear.

I love Pamela Pier, Dinosaur Hill, and their decades of service; and Veselka, which always needed more seats.

I hope they have some toys with rainbows decorating the walls of the new Veselka space.

This news, on the 22nd anniversary of my sister's death,
makes me doubly sad. Elaine lived on East 9th Street in a storefront, and bought my first son's first baby gift there, a German sponge bear, in May 1983. She bought my other two sons' first gifts there too. I continued the tradition with my four grandchildren. I'm happy that Veselka, where Elaine had her coffee every morning, is moving in. But the closing of Dinosaur Hill leaves a hole in the block and in my heart.

I've bought a multitude of birthday gifts, baby shower presents and toys for my own son. He is 28 now. It makes me extra sad when a place closes that I frequented with my son since he was a tot. Pizza places, bodegas, diners. This one is a tough one. Goodbye Dinosaur Hill. You'll be missed.

We are happy for Pam to get a little break, the Hill has brought delightful, educational and fun toys to a numberbof East Village kiddos. We will absolutely miss Pam wonderful seasonal store window displays!

Does Veleska own this building?

Pam used to sell my hand-dyed, hand painted baby shirts back in the 80's, helping to support me as an artist and single mom. Dinosaur Hill was a place of absolute joy and wonder for my son throughout his childhood, and my go to for whimsical, quality children's gifts. For years, I have felt a deep sense of comfort and joy every time I've walked passed the store's magical window display. This true East Village treasure will be missed! Thank you, Pam, for keeping the magic alive for us all these years and wishing you a truly joyful retirement!!!

Elaine lived on East 9th Street in a storefront, and bought my first son's first baby gift there, a German sponge bear, in May 1983.

A Käthe Kruse bear! I got one at Dinosaur Hill several years ago.

Richard [my deceased roommate] and I used to joke that if we got married, we'd probably have to register at Dinosaur Hill! (Actually, we were going to register at the now-defunct Bowl and Board before it closed.)

I’ll NEVER forget years and years ago when my puppy Leroy saw a stuffed wolf pup in the window and did a double take and growled at it. SO MANY WONDERFUL, INCREDIBLE toys in there. BEST Toy Shoppe I’ve ever been to. THANKS For the Toys and the Memories!!!! ...Wishing You a Great Retirement!!! ...and Hope the new Shoppe ia a Great Success!!!!
THANKS SO MUCH!!!!

Congratulations Pier. Thank you for all your years of joyful and helpful service. Nice to hear Veselka is able to expand.

I Love Dinosaur Hill! Hopefully we will see Pam dining at Veselka