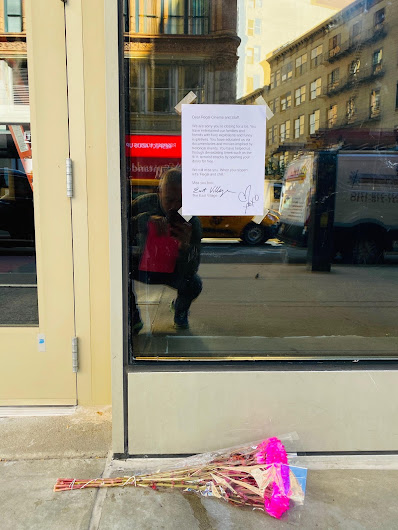 On a day when Regal Cinemas were temporarily closing again across the country due to the lack of new films to screen, someone left a love letter signed from the East Village and flowers at the still-shuttered location at Union Square.
EVG reader Jason shared this photo... 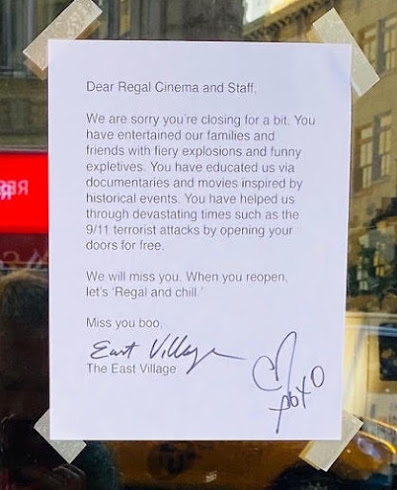 The note ends with, "When you reopen, let's 'Regal and chill.'" And! "Miss you boo."
Regal Cinemas — the second-largest chain in the United States with 536 theaters — will shut all its doors today. According to Variety, the last straw for Cineworld, the parent company of Regal, came when the new (and already delayed) James Bond film's release was pushed from November to April 2021.
Meanwhile, Gov. Cuomo has refused to let theaters reopen in New York. Something which this Regal location on 13th Street and Broadway has noted... per the marquee: "Theaters open safely in 48 states, why not New York?" 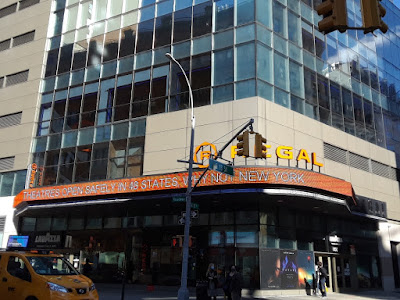 Bottom photo by Lola Sáenz
Posted by Grieve at 7:44 PM

Be kind to each other, like this. Even if you can't be as clever. Stay strong, EV!

This is thoughtful, I love it let’s go ev!

It was such a treat when opened up. Then became a run down Hollywood pipe machine.

Movie theaters like this one have become obsolete. Even before the pandemic theaters were seeing a large decrease in attendance with the increase of live streaming and downloading directly to iphones and new movies being released by Amazon and Netflix on line totally bypassing movie theaters. Within a few years most movie theaters will be gone.

Even before the pandemic theaters were seeing a large decrease in attendance with the increase of live streaming and downloading directly to iphones and new movies being released by Amazon and Netflix on line totally bypassing movie theaters.