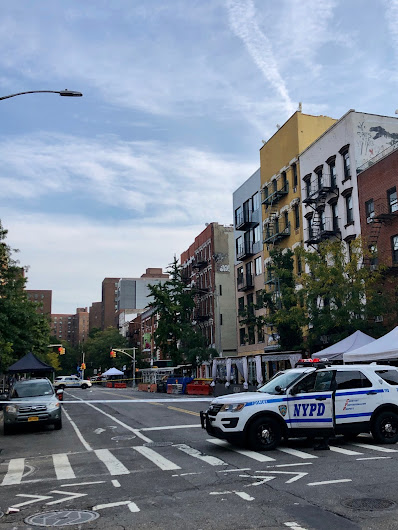 Avenue A between 12th Street and 13th Street is closed this morning as police continue to investigate a fatal shooting late last night.
According to the Daily News, a 26-year-old man was shot and killed during an argument on Avenue A at 13th Street around 1:20 a.m.
Police say the victim was shot once in the chest. No other details are available at the moment. Will update this post when more information becomes available.
William Klayer shared this photo from the scene... 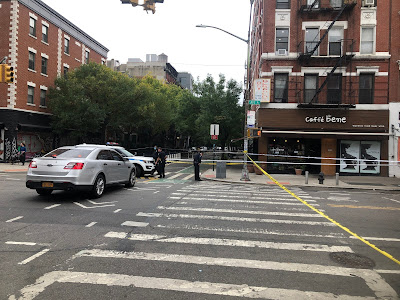 Updated 1:54 p.m.
According to the Daily Mail, "two groups of men were embroiled in a dispute on the corner of E. 13th St. and Avenue A" ... and an "unidentified suspect reportedly pulled out a gun and opened fire into the crowd of men."
Police identified the victim as Tyrell Williams.
Updated 7:32 p.m.
The Daily News has an update with a few more details, including quotes from the victim's mother. Williams was also a father of two.
Posted by Grieve at 9:44 AM

I went to Trader Joe's this morning and inquired about where it happened as I reached 12th St. The officer said "right here" and pointed toward the intersection of 12th and A.

And in Trader Joe's fake news, which of the four components of their Organic Foursome Vegetable Medley is not a veggie--carrots, corn, green beans or peas?

Give yourself an A if you said peas, which are a legume, not a veggie.

@bill: Last I looked, legumes are considered vegetables. (At least, they're not animals or minerals.)

@Bill. All edible plant matter is considered a “vegetable”. All the “vegetables” you mention have their own more specific classification. I think the beans are legumes as well.

i was there about 10am, took pics, and met william

The bars and restaurants are supposed to stop serving at 11 pm, a friend just told me. Is that true? Because these places on upper Avenue A are all staying open way later than that.

Someone lost their life, people! Rest In Peace and blessings.

it's true. They are supposed to stop serving at 11. The japanese place at 13th and A which used to be open way past midnight is wrapping up between 10 and 11 now and they were the ones to tell me that. They had cops come in and warn them to close by 11.

A man was murdered and most of you people are running your mouths about Trader Joes and food - GET LIVES. Wrong comments for your food musings.

How uncaring and glib you can be?

How the HELL did this happen literally three blocks above Ninth Precinct? WALK THE BEAT YOU NYPD LAZIES! Instead of show up after the fact as overpaid crime scene attendants.