Beat happening: A plaque unveiling at the former residence of Allen Ginsberg and William S. Burroughs 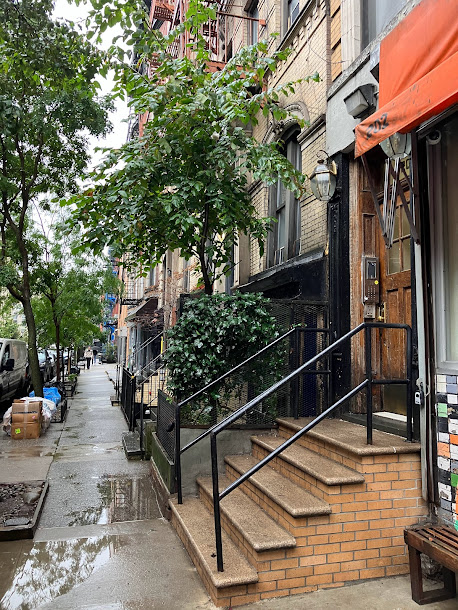 Tomorrow evening, Village Preservation is unveiling a plaque outside the former residence of Allen Ginsberg and William S. Burroughs on Seventh Street.
The event takes place outside 204-206 E. Seventh St. between Avenue B and Avenue C, where the two lived in a third-floor apartment in the early 1950s. According to NYU's Grey Art Gallery, "Ginsberg took some of his best-known photographs of the Beats in this apartment, on the building's roof, and on the fire escape."
Per the Village Preservation invite:

We will install a plaque to commemorate the Beat Generation at a building where Allen Ginsberg and William S. Burroughs lived early in their careers. The two and occasional visitor Jack Kerouac formed the nucleus of this influential post-war countercultural movement. We will hear excerpts from their work and a discussion of the importance of the Beat Generation and of these authors' early work.

Really? Ginsberg was a rover, as Grieve points out, so this will be contentious -- and, honestly, selfish. In his more radical moments, I recall him living on East 10 Street and his death, according to the New York Times, on East 13 Street (though it may have been in his multiplex apartment on East 12 Street, which was featured in an earlier post in Grieve).

To correct this, possibly each of the building should share in a commemorative, listing the dates he lived there, and the activities and books he published during those stays, at each.

This would also be a clear road map for any walking tour.

Really? A plaque? Sounds way too respectable for guys who primarily lived in the gutters and sewers and drug dens. Several manholes cast in bronze with their names/images on it placed throughout lower Manhattan would be far more appropriate and I dare say a good deal more creative.

To 1:51: Ginsburg, in particular, was a fixture and supporter of the poetry scene in New York in general and in this neighborhood more specifically. He did more to enrich and support a scene than most do and spent a lifetime doing it. I had more or less forgotten this fact too, that is until I found a bunch of old 1990s poetry calendars from St. Mark's Poetry Project in the trash a while ago. Even by the 1990s the poetry scene was still alive and thriving in the hood with tons and tons of DAILY readings, DAILY book signings, and more and that was a fraction, I'm sure, of what it was in the 1960s, 70s, 80s. Now there is practically NOTHING by comparison. Ginsberg was a singular positive force in that arena, and he should not be overlooked. Teaching, holding events and readings, publishing, lending your voice to others' projects, offering mentoring and advice to other poets, and just contributing to the synergy it takes to keep a scene going like that, Ginsberg did that. He was GLUE.