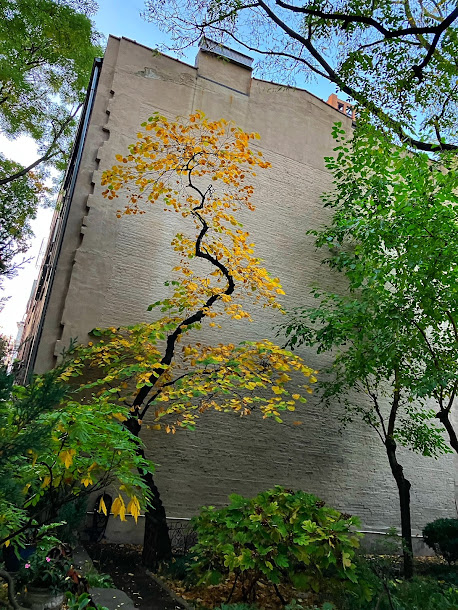 Fall at Albert's Garden on 2nd Street
• Your Election Day questions answered (NY1)
• Local City Councilmember Carlina Rivera and others speak out about the warehousing of rent-stabilized units (The City)
• NYC migrant crisis highlights long standing homeless shelter issues (Gothamist)
• City Council approves redistricting maps (City & State ... Village Preservation)
• Sietsema checks out MayRee on First Street (Eater ... previously on EVG)
• Pete Wells says that the French-influenced Claud on 10th Street "is one of the most impressive places to hit the East Village in several years" (The New York Times ... previously on EVG)
• The Thrillist guide to the East Village (Thrillist)
• Under house arrest, Anna Delvey is launching a dinner series out of her East Village apartment (Eater)
• The "Meet Me in the Bathroom" doc is now playing at the IFC Center (Official site... previously on EVG)
• UFOs on the big screen (Anthology Film Archives)
• Glendalis is the protagonist of this 10-year photographic voyage on the Lower East Side (i-D)
• Scarlett Johansson and David Yurman hosted a shopping soiree to benefit the Lower Eastside Girls Club (Vogue)
• The noise and traffic are constant complaints from the neighbors near Clinton Street and Grand Street (PIX11)
• Goggla captures the fall bird migration (Laura Goggin Photography)
• Heidi Klum's Halloween worm costume at the new Moxy Hotel on the Bowery inspired some good memes (Hyperallergic)
Posted by Grieve at 11:00 AM

Just my two cents, but it seems we live in a sick society. How is it that a convicted felon/grifter can start a "salon" dinner party series to further elevate her status (and potentially line up others for whom to take advantage) during house arrest? Isn't that like adding fuel to her potential fire? Why is it that the worst people in our society are rewarded for their illegal behavior? She has taken her grifting story to the max and is now using her celebrity as a calling card for "art" shows (using the term super loosely), a made-for-streaming drama, and more, and now a dinner party series? Gross. Here's an idea, Ms. Sorkin, or whatever your name really is, go find another neighborhood/city/country. I cannot believe we have to share space with the likes of you! Why not do something to CONTRIBUTE to society or this neighborhood in a positive way instead of mocking people with your so-called intellectual gravitas? I'm not impressed by this Charleton and neither should anyone be. She defines what is so sick about this country. Our embrace of celebrity and deeply flawed people is worrisome, indeed. And shame on the media for reporting so widely about this POS. I love New York Magazine, but elevating this person a bad choice. Also, paying $4,000+ to Lafayette Management for a First Ave. formerly RS unit is so weak just because you had to be in this neighborhood. Buy hey, I doubt you'll be paying the rent with your own money.

@1:19 You spent that much precious time of your life on her? This thing hasn't even happened yet, and probably won't happen at all.

Here's an idea: Let's trade her for Brittany Griner. I'd like to see this one deported back to Russia where she came from; I bet they'd know what to do with a grifter.

Yeah I didn't get an invite either.

Honestly, I'm probably most jealous of her fashion/style sense, probably part of the successful grift (whatever), but hey, she is probably getting couture messengered over at this point (all to be photographed like some self-perceived bad ass with an ankle monitor. She wears it like a talisman, she does).

At second glance, that IS another amazing photo, Grieve. What time of day are you getting such exquisite light?

Thanks — the photo at Albert's garden was in the late afternoon the other day...

3:42pm Hell to the yes if that was even possible & 1:19 agree 100% the real scare is the redistricting we're ( less and east village) are loosing representational percentage again! grrrr soon it'll just be real estate and hospitality controlled and us mere residents are screwed again

People, and the media, should stop giving Delvey the attention she craves. She's a phony and a scam artist, and kind of a silly one at that. And that makes her a go-to celebrity in our culture? I guess the media keeps covering her because it gets clicks, but I say enough already. Not interesting.

So people are just figuring out that we live in a sick society? Look at our most popular movies. They all involve murder without consequences. It seems like a large percentage of popular movies have as the main character an assassin, a CIA agent, a mob hitman, a gangster, a stalker, a medieval swordsman, dragons, serial killers, terrorists, bad cops, or psychopaths.

All of the top movie franchises are centered around murder: James Bond, Rambo, Star Wars, Jason Bourne, Tarantino movies, Dirty Harry, Die Hard, Kill Bill, every Marvel and DC superhero movie which are the biggest moneymakers of all, Batman, Lord of the Rings (with the #1 body count:836), even the Harry Potter movies feature dozens of deaths. Whats amazing is that we accept these absurd storylines which never result in arrest or a murder trial.

Since the days of the gladiators, people have payed to watch other people die. Humans are sick and violent. Even religion hasn't stopped people from being killers or paying to watch them. At least Anna Delvey didn't kill anyone. At least not yet. And if she does, Netflix will be the first to make another movie about her.

Oh Giovanni, how I dearly love your comments.

I know the world is violent; I guess my age has softened my edge and I just want people to be kinder, or at least I want more people who do good in the world to be respected and celebrated for it. Or not pushed in front of trains or run down on sidewalks. Or grifted. Or harassed.

Delvey got under my skin in terms of working the media. It's shameful to be such a media whore; embarrassing, really. I'm embarrassed that she can use criminality to her advantage, especially bc of her looks. But tech gave us so much practice at branding and false advertising, so much so that many young people now aspire to be "influencers". Of what value is a self-centered life for growth, progress, and enabling the greater good?

She came from Germany, she's a German/EU citizen.

> I'm embarrassed that she can use criminality to her advantage, especially bc of her looks.

If the media in this city had any scruples they’d stop writing about her and every time her name came up they’d write something about a minority woman instead.

It’s really just a story about a privileged person who ripped off people who were even more privileged. No consequence on either side.

@Giovanni. Well, yes, that’s true. But our real sickness is psychological, not physical. We lie to ourselves. We cloak our base motives in high-sounding talk. I’m glad I wasn’t born 1000 years ago. But I wish I’d have been born a 1000 years from now when, perhaps, hopefully, we’re less sick as a species. As for now? We’re half-baked.

@Anon. 3:51 from yesterday - she was born in Russia. Even says so in the first line of the Eater article: "Anna Delvey, the Russian-born con artist who defrauded New York socialites and financial institutions"...

Redistricting. Hmmmmm. So that means our district now includes Washington Square Park and NYU. And Carlina can run for another short, 2 year term.