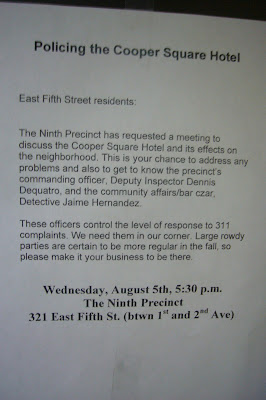 According to Dequatro, Cooper Square Hotel officials have called for a meeting with the Ninth Precinct. The call occurred after the NYPD, State Liquor Authority, Health Department and other agencies visited the hotel on July 2, Dequatro said. Several violations were found, though he couldn't recall the specifics at that moment. (According to public records, the Department of Health issued the hotel 45 violations during a visit on July 16.)

Before hooking up with the hotel, police officials wanted to hear complaints about the hotel firsthand from residents.

Dequatro quickly discussed the nearly four pages of stipulations (they begin on Page 7 here) that the hotel agreed to in order to get CB3 to approve the liquor license. And Dequatro explained the difference between laws and stipulations, which are really just a civil agreement. Or something. If there's a violation of the stipulations, then the only recourse is to notify the State Liquor Authority (SLA), who will take it under advisement.

"Other agencies have allowed [the hotel] to open a business next to your windows," Dequatro said. "It's not going to be an easy thing to enforce...to correct. We can't work magic."

The residents, nearly 20 total (also in attendance -- Stuart Zamsky, head of the East Fifth Street Block Association, and Susan Stetzer, CB3 district manager) then chimed in with their stories.

One resident talked about the blowout this past Saturday afternoon on the hotel's increasingly notorious 21st-floor penthouse, apparently available for private events. The thump-thump-thump was deafening down on Fifth Street, the resident said. "No one could stand out there there without getting their eardrums blown out." When she went to complain, a hotel hostess dismissed her with the wave of a hand, she said. 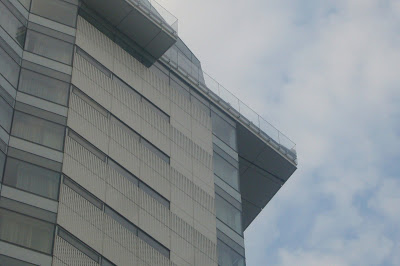 Regarding the Saturday bash, another resident said he went to the hotel to complain, but no one would summon the manager for him. Anyway, the employee told the resident that he couldn't do anything because the hotel was paid $20,000 for use of the penthouse.

Another party raged Sunday night until 11, a resident said. A Sixth Street occupant said, "You get girls screaming off the penthouse. I can hear what the DJ is saying." And she lives on the first floor.

While Dequatro is aware of noise issues from the balcony and back garden, he was surprised to hear about the 21st-floor penthouse. "I wasn't aware this space existed until 10 minutes ago," he said. Some residents said that they were never told about plans for a penthouse during community meetings with hotel officials before the Cooper Square opened. 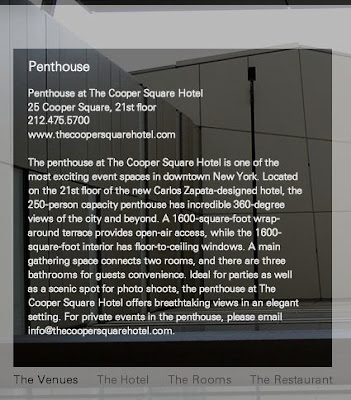 Meanwhile, down below: One Sixth Street garden-level resident said hotel guests throw cigarette butts and trash over the fence and into her yard.

Dequatro took the names of any residents willing to let the NYPD into their homes with sound meters during a hotel penthouse party (or elsewhere). However, the NYPD sound meters can't measure the bass coming from the speakers on the penthouse -- a source of many of the residents' complaints. The Department of Environmental Protection (DEP) has the sound meters for this, though that agency, with a smaller staff, takes longer to respond, Dequatro said.

No date has been set for a meeting between the Ninth Precinct and the hotel.

For further reading:
Residents discuss the problems created by the Cooper Square Hotel: Meanwhile, across the street, a party for a sports car (EV Grieve)

Party at Cooper Square Hotel (EV Grieve)
Posted by Grieve at 7:15 AM

It's good to know the precinct is taking an interest, but I'm not convinced there will be any of their support for the residents the next time a loud party rages on into the night.

sounds like the precinct is just going through the motions. still holding out hope, though.

DI Dequatro and Lt. Fernandez seemed determined and willing to help. They even passed out phone numbers for residents to call in the event of Cooper Square Hotel noise that bypass the 9th Precinct's main line (the one that rings for 20 times before the automated system kicks in...)

If there's a noise problem, then people need to call... to take action. Too often people suffer in silence.

The DEP noise people say they will come in about 2 weeks from the time you call 311. They have a night crew that comes too, so they can measure 24/7.

The hotel staff not responding to resident's complaints is disgusting but not surprising. Maybe the Aces and Eights douchebag t-shirt guy could take over.

I was in that penthouse and my impression was that it was so high up and a good way to get the party noise away from the residents. I guess noise doesn't work that way. Unfortunately it's not like heat which would rise.

Why aren't there noise cops like traffic cops? Could be a big revenue source for the city -- and make the city livable.

It's time people wake up, stop complaining on the computer and do something about this.

One thing that I can't stand is when people say "This is NYC, it's supposed to be noisy".

The only noise in the 1800's and early to mid 1900's was the EL TRAIN.
They didn't have roof top clubs blasting music over the entire neighborhood. 2000's suck.

How about you idiots move somewhere else?? Bunch of MORONS. These bars and other establishments were here long before you.