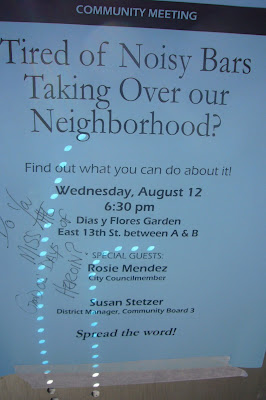 -- CB3 district manager Susan Stetzer distributed and read from the interview that she did at Jeremiah's Vanishing NY on How to Complain.

-- The people are not happy with the quality of life near the glut of newish bars.

-- Keith Okada, the manager of Superdive was there.

-- Mason Reese, an owner of Destination, was there.

-- Both seemed a little defensive. Okada seemed more defensive, though he didn't speak until 3/4 through the meeting.

-- Both seemed willing to do what it took to be better neighbors.

-- One resident complained about the open windows at Destination. Closing them would eliminate half the noise problems.

-- Mason said the windows are closed around 10:30 on weeknights and midnight on weekends.

-- One resident said that this was not true.

-- In response to a resident complaining about the trash that bargoers leave behind on the streets, Okada said that he takes great care to clean up in front his bar as well as the buildings on either side.

-- Okada said that he has called police twice because of loud people who wouldn't be quiet outside the bar.

-- Okada said some people just don't listen, and ignore requests to keep their voices down.

-- Upon hearing this, a resident said, Don't you sell kegs? Aren't you encouraging this type of behavior?

-- Okada said that everyone in his bar is 21 and of legal age to drink.

-- He offered to give out his phone number to anyone who wanted to talk about the bar.

-- One longtime resident said that this isn't a neighborhood that "sits on its ass" and looked at the Destination and Superdive reps and said that they are officially "put on notice."

-- A Sixth Street resident talked about the ongoing saga of Death & Company and wondered how they got a liquor license.

-- One of the organizers said that Superdive has agreed to a meeting with neighbors, and that CB3 and 9th Precinct officials may attend as well. No date was mentioned.

For further reading:
Stop the SuperNoise - Community Meeting (Blah Blog Blah)
Posted by Grieve at 6:59 AM

Pretty darn good minutes from the meeting. It was encouraging that people from Superdive and Destination attended the meeting and agreed to meet with residents over specific grievances, but further action on a larger level (wrestling control from SLA and Albany, tighter liquor license approval, help from the Mayor on noisy patrons) seemed vague and daunting other than writing to representatives. Also it was great to see so many residents at the meeting but there's so many along Avenue A that didn't one wonders how to more affectively get to them to help take action.

Thanks for the comment, DWG. I agree with you. I, too, was encouraged by the presence of Destination and Superdive....as well as all the residents who took the time to be part of the meeting.

I can vouch for what Mason said about Destination; they do close the windows at midnight on weekends. I once had a party there on a weekend night (it's not that old of a place!) and that was their exact routine. JEE-SUS CHRIST. I'm from the neighborhood and I go there frequently. I know people in the neighborhood and they go there frequently, too. Complainers are a bunch of filthy liars and society outcasts. Tell them to move to FiDi if they hate the noise so much. Quiet as a library after 7pm!

Upon hearing this, a resident said, Don't you sell kegs? Aren't you encouraging this type of behavior?

-- Okada said that everyone in his bar is 21 and of legal age to drink.

One longtime resident said that this isn't a neighborhood that "sits on its ass" and looked at the Destination and Superdive reps and said that they are officially "put on notice."

As for Brian Van ... just shut up please. I don't care if Destination shuts its windows or not; it's still an awful, jello-shot-selling shitbox full of loud and obnoxious people. Boysroom was never such a nasty neighbor (nor were predecessor restaurants Fuzion or Oggi). And saying "move to ___ if you don't like it!!" is basically the calling card of a class-A douche. You're welcome.

Didn't Susan Stetzer and CB3 give Destination a green light on the license? Blame her.

Last night, when i arrive home at midnight, the windows of destinations were still open!! That is on a wednesday night. That is after him commiting to close them at a decent time during the meeting.

Don't believe CB3 gave a green light for the type of establishment Superdive is running as compared to what was there previously.

As for Destination and other bars- everybody has different tolerances. Some of us feel the amount of bars in this two block stretch is out of balance and the more popular the recently opened bars the harder it becomes to tolerate excesses. Hopefully we'll meet with Mason and others soon and work out the "open windows" and other issues.

Before it was SuperDive, it was a book store, not a bar. Re CB3 approving the Destinations liquor license, I don't think anybody saw this coming or the residents would have put up a fight. The previous tenants attracted a much more adult crowd, not the college frat bar types that are coming there now.

In my opinion, Destinations is worse than SuperDive in terms of noise because of the open windows, but on weekends the number of people standing on the streets is astounding when you combine the crowds from all ELEVEN bars in this 2 block stretch of the avenue.

It's really about the intensity of all these bars in one place. Of course there have always been bars here and if there were none, we wouldn't be happy about that either. It's the absolute concentration of them that has dramatically changed the character of this part of town.

So Grieve, are you going to reveal to me which person in the crowd you were? I examined everyone closely, but I still don't have a clue.

I'm actually the manager of Superdive.

Hmm, based on your photos, I must have been behind you.

I wish I could have attended this meeting, but I had a kitty sleepover.

I am still praying that a bar doesn't go into the old Mundial space on 12th Street. We were all tortured by that place despite the owner's claims at the start that they were going to be good neighbors.

Hey Anon, thanks for the love letter! Maybe we can meet at Tompkins over the weekend and give each other sensual backrubs while drinking Modelo out of paper bags? :-D

Brian Van: Massaging and drinking in the park is probs illegal, toolio, plus I'm way more a Stuyvesant Park girl (please don't go there) and you are so not my type. But I'll buy you a jello shot just to make you go away. Kisses brah!!

Grieve
Are you sure you weren't sitting directly next to me, because that's who I had you pegged as.

Kudo's to super dive manager, it's been quieter and cleaner...yet it IS mid Aug. . My fear is really of September when super douches dont have share houses to be at.
As for ham boy, didnt Jill say he was apathetic to neighbor's complaints? His doorman is pretty rude too. Drop off probably has the best doorman/bouncer...at least he pretends to sympathize with neighbor's.

Unless hamboy said something after I left (I had to leave when the 11th Street bar woman started raving for the 2nd time) he only said that when his customers were on the street they were no longer his problem, legally. I never heard him speak again, nor could I verify if he still has the childhood lisp that made him famous.

And now we can't stop calling him hamboy, thanks a lot.

Also: this weekend so far: hamboy did indeed close the windows by 12:30am when I walked by on Fri night, and both hamboy & superdive had nobody loitering.

On Sat morning the streets were pretty darned cleaned in front of both their places, not so much in front of their bar neighbors.

The loiterers were in front of the Laundry bar, Forbidden City, Common Ground and Habibi. There were several youngsters lying in the doorway of the building next to Habibi, they seemed settled in for the night.

Sitting in a dirty doorway has historically been relegated to people in appropriate homeless or punk rock clothing - and these girls were wearing their de rigueur teeny skirts (they called them pussy belts on Rescue Me), highest of heels and a face full of lipstick.

I attended the CB3 meeting where what's now Superdive made its case for getting a liquor license recommendation, under the guise of a bookstore.

I thought "you've got to be kidding, how many tiny, independent bookstores need to sell booze?"

Not that CB3 has any real power but it didn't seem like anyone else there believed the bookstore b.s. either. And yep as it turned out they were lying about their intentions.

Are the owners of Superdive telling the truth to the community now? Why should anyone believe anything they say?