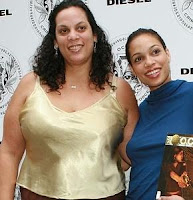 The mother of "Sin City" actress Rosario Dawson is trying to move back into the East 13th Street tenement she turned into a "squat" 25 years ago -- but the tenants don't want her as a neighbor.

Isabel Dawson moved out of the building two years ago, having feuded with the other occupants of the "squat." Rosario's father, Greg Dawson, who is separated from Isabel, still lives in the tenement along with her handicapped uncle.

Isabel -- who broke into the abandoned tenement with Greg when they were both 21 (and Rosario was 6) and installed plumbing and electrical wiring -- feels she's entitled to move back in, despite all the bitterness from past squabbles. Residents say they are scared.

And what's with the "quotation marks" around "squat?"

[Photo by Roger Wong/INFGoff.com via the Post]
Posted by Grieve at 12:00 PM

And what's with the "quotation marks" around "squat?"

What do you mean what's with the quotation marks? It would sound mad weird without them. Squate, give me a fuckin break. You can't even define that. It's the Post not EVGrieve.

The Original B said...

i live around the corner from the 'squat' and i'll tell you - some of the residents of that building are the scary ones - its a building filled with lowlife , shiftless types who think they own the neighborhood. i'm a life long reseident of this neighborhood (70+ years) and i'd love to see the whole damn bunch of them tossed out on their asses.

pray tell - just which of the residents is afraid? The big musclehead goon with the tatoos, always walking the dog and strutting around like he's god? The crack addled bike riding tattooed nut? the various skinny wastrails who sit on the stoop? Just who is afraid???

I think Rosario's Mom could do a lot better than this.

and a further thought - that building must be overflowing in violations! Time for a little inspection perhaps? a well placed call to the building department to have a look see into the hellhole that is 544 East 13 st...........