200 Avenue A going directly to SLA for its license 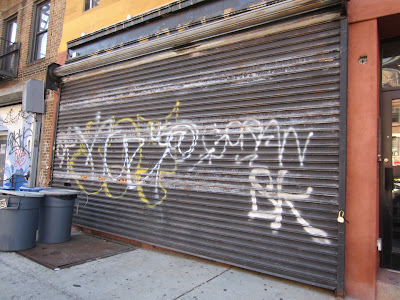 The people behind the "art gallery with a full-service restaurant" concept — who have appeared before and been rejected by the CB3/SLA committee three times — are now going directly to the State Liquor Authority for its license. The group, calling themselves Hospitality LLC, hope to open in the former Superdive space.

The group appeared before the CB3/SLA committee in November with the idea of a restaurant/lounge "that involves all the senses," including the now-legenedary smell machine. They came back in April, and were told to do more community outreach. The didn't have any better luck in May given the strong opposition from neighbors. 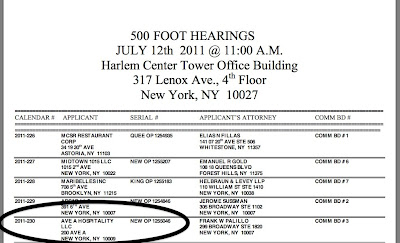 One resident noted that there weren't any notices about Tuesday's hearing on the gate outside 200 Avenue A. Meanwhile, this weekend, AD Projects ended its run using the space as a temporary art gallery. As another resident said, "it's been great for the neighborhood to have this kind of use made of this space — without the need of a liquor license."
Posted by Grieve at 6:43 AM

For those of us who can't be at the hearing (and who can on a work day?), is there anyone we can email this morning to express our objection to this liquor license?

i'm with you anon. what is it about the phrase "RESOLUTION AREA" that these idiots don't understand?

They understand "resolution area" is a made up term and CB3 is a joke. They have made themselves a joke by their poor management of distributing liquor licenses and deserve to be circumvented.

If CB3 can't evaluate operators and opportunities in a realistic way and as individual companies, they will make themselves useless.

So keep trying to shut down ANY business w/ a liquor license and make yourselves irrelevant.

TO BE CLEAR:
I don't want more douchebag bars like these clowns at CB3 have already approved (Billy Hurricanes, etc) but I, like many neighbors would like good bars and restaurants with good operators in our neighborhood.

i have a question regarding CB3 members .
how many on the board own or are partners in bars restaurants or clubs ?

anon 8:16am - yes you can write a letter and send it to CB3 TONIGHT (sstetzer at cb3manhattan.org) and she will bring it to the hearing. Be sure to label your email URGENT SUPERDIVE or something like that so she sees it.

Re other anonymous question about how many are bar owners: I know of 2 definitely but of the 9 listed on the CB3 website, after going to what feels like thousands of meetings, I can only identify 6 of them, and one of those I've seen only once. Please take into consideration that not only am I bad at remembering names, but also faces, so I might not be the best person to answer this question.
For sure I've never seen all of them show up for their monthly meeting -- usually there are the core four and then one or two others might wander in.

The known bar owners are David McWater and Ariel Palitz. There used to be a third but she is no longer on the committee (Meghan Joye).

The whole CB3 licensing committee is a joke. Ive sat in on many board meetings all over New York City and i have seen none quite as manipulative as CB3. And the bunch of people that come out to protest and fight for the "good old times" ... back when the neighborhood was filled with junkies and questionable characters... are all delusional. I hope they win and set a nice precendence for the community and encourage more operators to fight for what is right.

Anon the only people who have been to meetings around the city are bar owners. Might want to identify yourself first, just to be clear about your position.