Fu Sushi gets the OK to reopen 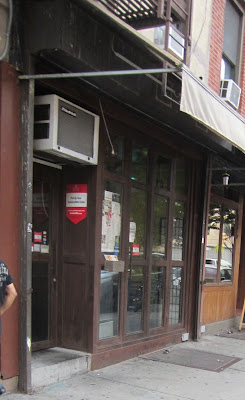 After several failed attempts, the DOH let Fu Sushi on Avenue B reopen. On Friday, the DOH revisited, and gave Fu nearly a clean bill of, um, health — just two violation points... that's down from the 99 points that shuttered the place back on June 23. So the the restaurant was able to reopen for the weekend.

After three damning stories, what are the chances that the New York Post notes that Fu Sushi has reopened?

Previously.
Posted by Grieve at 6:29 AM

To those of us that love Fu Sushi,excellent news. Regulars won't disappear. Go Fu!

I'm sorry but who cares?? Do people really like Fu Sushi? I live around the corner and one day decided on some takeout. A $2 surcharge for 3 meager slices of avocado added my salad, mediocre maki, and $1 PER ROLL surcharge for asking for brown rice instead of white. And let me tell you, i've never seen less rice on a maki roll. Which is not to say the fish portion of the program was generous... can be summed up in two words: overpriced and mediocre. Their failing grade is no skin off me.