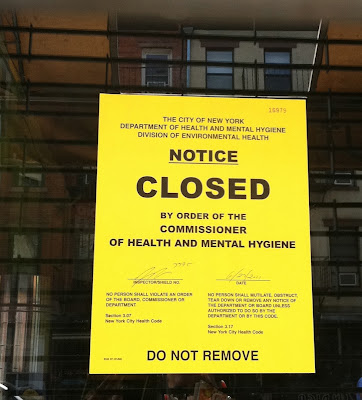 On June 27, we noted that the DOH had temporarily closed Fu Sushi on Avenue B near 11th Street. The restaurant was closed after receiving 99 violation points in its last inspection, which took place June 23.

Meanwhile, a reader over the weekend noted that "Fu Sushi on Avenue B was open for business and pretty busy. The bright yellow DOH sign is posted on their door, but at night they are keeping door propped open so no one reads it as they walk into the restaurant. I called 311 about it already, but they said it could take up to a month until this is addressed." 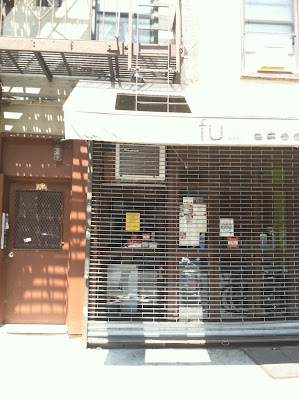 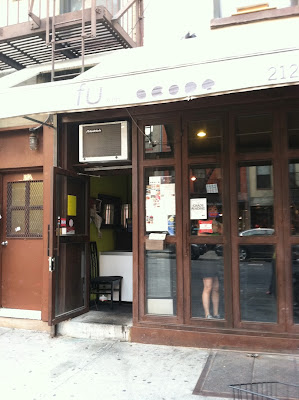 Neighborhoodr has also been covering this story. You can read their report here.
Posted by Grieve at 6:50 AM

I called 311 about it already, but they said it could take up to a month until this is addressed."

Didn't the 311 operator say the same thing about the cat stranded on the barge in the East River? That Bloomberg innovation is really working out well. Hopefully, patrons of the appropriately named (eFF-U) sushi restaurant are using lots of wasabi, which has anti-bacterial properties.

Amazing how Ray is caught the same day for violating his DOH order, and this place gets away with it. The rules should apply to everyone equally. I hope the DOH sees this and gets over here and shuts this place down for good.

Strictly from a business standpoint , you'd have to be out of your skull to defy the DOH when they shut you down. It's stated very clearly in their rulebook that if you remain open after they close you , they have the right to shut you down forever. I understand how pissed off you can get when they come in and tag you with all sorts of fines but, who the hell would want to take the risk of losing everything? Plus, you know from that point forward it's going to be about ego. They are going to want to show you who's the boss and they're going to be gunning for you every time they come out to Ave B. It's just crazy to go against them. Just fix you're mistakes and move on Fu. I'd like to see you around for many years to come.

FU sushi has always been the best. In the 50 times I have eaten there I have had nothing but the best sushi and the best service. If FU had violations, I bet everyone on that street does. Hope FU is reopened soon.

i have eating at Fu Sushi a million times.. I have never gotten sick or anything like that. I would love to see what these violations are. I think this is just another squeeze the small business owners are getting from the State.

Sanitary Violations
1) Evidence of mice or live mice present in facility's food and/or non-food areas.
2) Live roaches present in facility's food and/or non-food areas.
3) Hand washing facility not provided in or near food preparation area and toilet room. Hot and cold running water at adequate pressure to enable cleanliness of employees not provided at facility. Soap and an acceptable hand-drying device not provided.
4) Personal cleanliness inadequate. Outer garment soiled with possible contaminant. Effective hair restraint not worn in an area where food is prepared.
5) Sanitized equipment or utensil, including in-use food dispensing utensil, improperly used or stored.
6) Facility not vermin proof. Harborage or conditions conducive to attracting vermin to the premises and/or allowing vermin to exist.