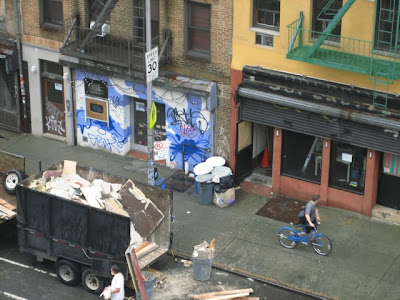 EV Grieve reader dwg notes the work going on now at 200 Avenue A. There aren't any permits on file for work here via the DOB.

Meanwhile, we understand that the people behind the "art gallery with a full-service restaurant" concept — who have twice appeared before and been rejected by the CB3/SLA committee — are now going directly to the State Liquor Authority for its license. Their hearing with the SLA is on July 12 at 11 a.m. We'll have more on this later.
Posted by Grieve at 1:49 PM

Email ThisBlogThis!Share to TwitterShare to FacebookShare to Pinterest
Labels: 200 Avenue A, Avenue A, Superdive

tells you something about these folks doesn't it?
glad thy are no on my block!

another example of money talks/walks?

Forget Superdive; There's a bicyclist on the sidewalk. Call 911!!

well they did pre-file a demo application last week... though they still don't have permits!