Around 7:45 tonight, residents near the ConEd substation on East 14th Street and Avenue C reported hearing an explosion. However, many people thought it was thunder... until the FDNY responded... Breaking 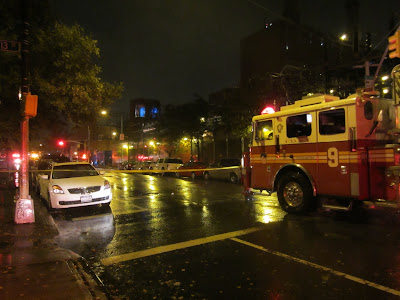 According to EV Griever reader Robert Galinsky: "Big explosion, giant black plume of smoke, no flames." A witness at the scene said that it was a gas leak. 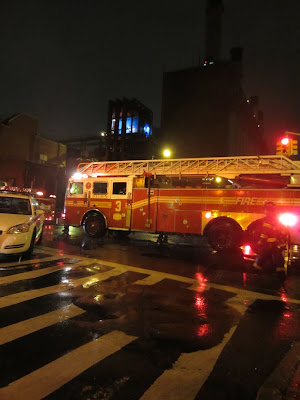 More emergency crews are responding to the scene... 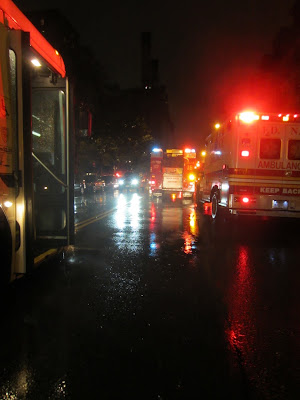 In any event, 14th Street at Avenue C is cordoned off... the M9 and 14D buses were being rerouted... Avenue C is blocked off at 12th Street.

Just after 9, @aimeeweiss noted that most of the emergency crews packed up and left the scene...
Posted by Grieve at 8:39 PM

I just looked to see if you knew what was going on, and I see you have the news. Thank you so much for the info, EV Grieve, because I didn't know what it was. I heard an explosion earlier, too, and assumed it was thunder. A number of five trucks have gone down 12th Street, and I hear sirens in the distance.

Thank you for posting this so quickly. I live on 13th btw. A & B, and heard it and put a shout on Facebook. You came up with the answer first. Thanks.

Im on 11th between B&C and my lights flickered and I heard some sort of loud noise outside. I guess it was this..

Has anyone else gotten whiffs of a weird smell coming in through their windows? I have had it happen three times in the last hour or so. Connected to this? It's a weird smell. Doesn't linger.

I can see the 11 o'clock news now - "The fire appears to have been caused by a futon illegally dumped by Stuy Town's young transient community..."

It's all Marty's fault.

I live right on Avenue C and 13th street, i saw the roadblock and everything, and a whiff of gas. Didn't really see a smoke since it was raining hard. At first it was only a police car and firetruck, and then later there was about 6-7 firetrucks. But yea thanks for posting this up and letting me know what happened.

I sure hope it didn't unleash a new array of unregulated fine particulates (soot) that flow downwind from the plant at a rate of 70 tons per year more than it did prior to the upgrade of the plant about 10 years ago when it starting producing power for the entire east side of Manhattan.
(Ha ha my word verification is "suckest.")