Breaking: The Free Willie Nelson is caught on fire!

Oh no! The Free Willie Nelson — the RV that usually parks around the neighborhood — caught on fire this morning. It was parked on Sixth Street near Avenue A. 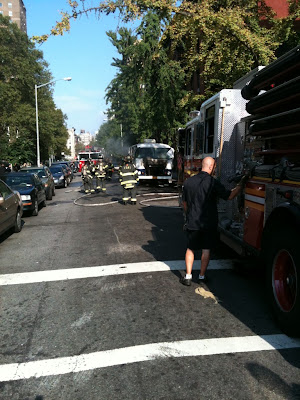 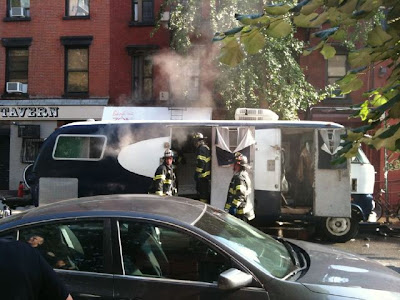 What will this mean for his 50-state quest?

Thanks to @joshchambers for the photos!
Posted by Grieve at 10:18 AM

oh no!! i hope it wasn't too badly damaged

Maybe it was just the real Willie Nelson inside.

Dear Friends of the Free Willie Nelson,
Thank you for your huge outpouring of support regarding the fire that broke out in the motor compartment Monday September 12.
The fire was most likely the result of some kind of electrical short in the main fuse block. We were thinking of converting to biodiesel, but let' s see what "The Hartford" has to say.
Although the fire is a setback, on the bright side it may well result in helping to get the sponsors I need to pull my project together.

As many of you know I have been planning a cross country odyssey I call-
Fifty Two Fifty Trip  where 12 intrepid East Villagers visit all 50 states in fifty-two weeks driving three Dodge Travcos like this one with me and the dog.

If it flies, Fifty Two Fifty Trip would be an epic voyage.
Paid to travel the entire country, the crew and I will function as a team to rediscover our land one state at a time, and along the way, the 12 protectorates, .
I feel that since 911 we have been fed a steady diet of fear and wedge issues that have split us up as red vs blue states.

Our mission will be to spark a  reuniting of the U.S. as "us,"  by example, go into the heartland with a message of fearless strength through diversity, tolerance and mutual support.

We are joined at the hip by asphalt and the open road is calling, not "Big Brother" or "Jersey Shore," (OK a little like "Dangerous Catch," ...boats...) just a little East Village Crew come to town, play some tunes, host mini state-centric traveling feasts and art shows (State bird, tree, flower, song, stuff) for local causes.

Each crew member will bring a special skill set, (like Star Trek) to find out all the things that make the states unique or alike and examine how we stand apart or pull together.
Everyone going shoots, blogs and helps cook and clean. There is an inner journey too you know.

Positions still available are:
Ship's Lawyer (oh boy are we going to need one...)
Ship's Doctor (or Veterinarian...)
Ship's Chef (able to pull off a traveling feast in the capital of each state)
Ship's Embedded Blogger, Historian, Relief Bartender
Base Camp Personnel Researchers, Advance people, Coordinators, Interns, sketchy people who hang out for cameos and so on.
(Kaz might swap for base camp spot if he can't take the kid.)

We will podcast daily and produce a video about each state and the people in it -- with a special show about the protectorates.
How many can you name?

Sam the man-I can dig it.Thanks

the fire was a publicity stunt to raise more money. watch and learn. soon they will release a remake of willie nelson's "On the Road Again"