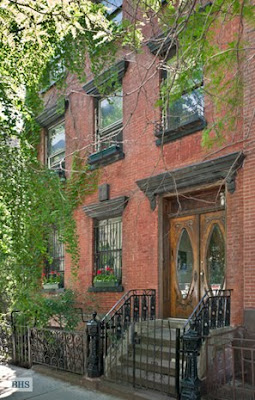 Preservation groups had been working to try to protect 316 E. Third St., a circa-1835 house bound for the condo after life. Unfortunately, the Landmarks Preservation Commission (LPC) has rejected a hearing on the matter, according to a post yesterday at the Greenwich Village Society for Historic Preservation website (GVSHP). As GVSHP noted, "in 2008, as part of their own evaluation of the structure for the Environmental Review for the East Village/Lower East Side Rezoning, the LPC called it 'eligible for landmark status.'"

Last week, though, the LPC "again responded by refusing to consider holding a hearing on potential landmark designation of the endangered structure." (Read the LPC letter here, PDF)

So, this will be the fourth pre-Civil War building in the East Village to be demolished of late. The others: 326 and 328 E. Fourth St. and 35 Cooper Square ...

And so, the historic townhouse between Avenue C and Avenue D will become a Karl Fischer-designed, 33-unit condo that will destroy the home and the bucolic adjacent garden space. 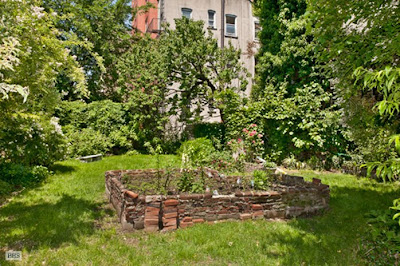 agreed, tourist -- the small-scale of the EV is one of the reasons I was drawn to this neighborhood. If only they could retain and incorporate the charming facade of this building in its transformation. They're throwing out the proverbial baby with the bathwater when they tear these lovely places down.

This is a sign of the times, where greedy realtors and developers care little for the culture of a neiborhood and its residents. We all know that civilization and time move forward, but we must always look to the past in order to see the future.
The Landmark Commission needs to reveiew their priorities.

wow, the person who sold this will now have to live with what he has done..

After a wasted effort to save a five-story Art Moderne building at 980 Madison, Tom Wolfe published an epic 5 page exposé in the NY Times on why "...Never again could you expect a landmarks commissioner, much less a chairman, to stand up to a mayor. And, as a corollary, never again could you expect any of them to stand up to Big Real Estate, if Big Real Estate had the mayor’s backing. As they say at City Hall, they got along by going along...

"...Landmarking no longer exists in New York City, not even as a principle — or not above the level of the occasional parish house in Staten Island or rusticated old stone archway in eastern Queens..."

It's worth the read.

Don't know what's up with that link. It worked in preview. It's not working so well now. You may have to hit it twice to get to Tom Wolfe's op-ed for some reason. Just in case that doesn't work, it's called "The (Naked) City and the Undead)" from the NY Times in 2006. You can Google it. Or maybe this'll work better:
http://www.nytimes.com/2006/11/26/opinion/26wolfe.html

Money is involved. Corruption. An investigation to all the crimes commited by the buildings department, developers, and sic "Landmark Preservation" will soon be revealed. I believe. Where is Rosie Mendez? Representation?

It seems, unfortunately, like the real estate lobby has its tentacles around most of the leading candidates for mayor in 2013, so this will continue post-Bloomberg. Does anyone have reason to believe one of the major candidates is not beholden to these groups?

I remember that piece. Good to revisit.

I heard the guy who sold this is named Barden and he used to be on of all things the housing committee of CB 3. I heard he moved to Park Slope. Good riddance.

Now Council member Chin is once again selling her soul to the RE community by backing down on the landmarking of 135 Bowery. Not only that she is behind the Chinatwon BID and a huge supporter of the SPURA plan that is stealing the last great opportunity to develop affordable housing away from the people.

Call Councilmember Margaret Chin's office and tell her to support landmark designation for 135 Bowery. The community wants it and the City has deemed the building a landmark!

The Real Estate lobby owns the GOP, but the RE lobby will always hedge their bets by giving $$ to Dem mayoral candidates, too. They had their hooks pretty firmly in Weiner, but now he's history. That leaves them guys like DeBlasio, Thompson, and maybe Liu to give $$ to. However...RE knows that despite their campaign $$, all these guys will most always take the other side of their issues. RE knows that what it's purchasing from these guys is not fealty. What it's purchasing from them is insurance that their side of the story will at least get a listen. (What has amazed/shocked me about Bloomberg is his refusal to even pretend to give voters a hearing in RE disputes. There are literally thousands of voters in Stuyvesant Town and he blew them off completely during the proposed 2006 sale, despite protestations in the City Council and elsewhere in his gov't and again over the Roberts J-51 case during a freaking election, in 2009.)

If regular non-elite NYers take the attitude that all the candidates are equally at home in RE's bed, we can pretty much 100% count on a Mayor Ray Kelly and lots more of the same abuse that Bloomberg's heaped on us during his reign.

This is beyond ridiculous and infuriating. How can I become LPC Chair?

I do find it interesting (if that's the right word) that despite the economic turndown, real-estate developers are only now targeting what was, even at the height of the economic boom, the last frontier of Manhattan development--Alphabet City. I just have to wonder what rich sucker is going to buy 326 and 328 E. 4th St., given it's a half block from the projects and 20 minutes walk from closest subway (and that investment banker/actor is going to *really* enjoy the bottle and can collection at Fine Fare supermarket a few doors down!) As for the LPC, they don't give a flying crap about a neighborhood that's historically working class and immigrant with buildings designed by "nobodies" and reminiscent of a gritty past that they like to pretend is not part of their glittering city of illusory wealth.

This is an OUTRAGE. When the f*ck are these people gonna get off their a$$es and PROTECT THE EAST VILLAGE! It is UNCONSCIONABLE that we have NO historic district to speak of and NONE EVEN PROPOSED in ALL OF ALPHABET CITY! they may as well hang a sign on 1st ave that says "GO EAST AND FREELY PLUNDER, ALL YE WHO WISH TO DESTROY IRREPLACABLE ARCHITECTURAL HISTORY AND REPLACE WITH SHODDY, UGLY AND COLD GLASS AND STEEL MONSTROSITIES TO HOUSE THE MONIED TRANSPLANTS WHO COME HEREWITH TO DESTROY CULTURE AND COMMUNITY WITH THEIR SHALLOW, CONSUMERIST, SELF-OBSESSED and NON-NEIGHBORLY PRESENCE."
they can hang the welcome mat on the new starbucks for godssakes.
i used to live next door to this building and shudder to think of how sadly and permanently this block will be changed by
a) what it is losing
b) what will replace it.
for shame, Tierney, FOR SHAME.

what i dont get is that they dont realize how awesome these old buildings are.

P.S. Rosie Mendez and Margaret Chin. They only "show up" for the coffee and free press. Events like Life closing were a nice place for Mendez to get that "shot" of mere absurdity.

Lets NOT re-elect these apathetic people and their friends on the NOT LANDMARK but COMPRESS IT Commmittee.

Lets all come up with a new party name!!

real estate agents tout the historic east village (like they did the charming, picturesque west village that has been mostly replaced by tall glass monstrous "disarchitecture".
the historic buildings in the west village now cost millions of dollars, a measure of their rarity and current worth.
why can't the real estate folks see that preservation of these historic east village buildings is worthwhile, even if only the rich can afford them.
will photographs be the only place we will be able to see these beautiful buildings?

i think many RE developers are from the south, and have assumed the duty of destroying anything that dates from the war or before in nyc. which, as history buffs know, was not firmly in the union camp during the great struggle.

You wanna save an old building? You better lawyer-up. That's the only way you "might" have a chance.

If the preservationists can't get a lawyer to step in on their behalf, there is no chance.. Make all the phone calls and magic-marker signs you want.

Not as bad as that guy who was seemingly killed in Flushing after the he would not lie down and let developers take his home away via phony foreclosure papers - but yet another example of how politicians are so sure that elections are ONLY won via big money donations that they don't even bother PRETENDING that the public good is of any interest to them anymore.

Really makes me wonder if vote tampering is not going on on a VERY wide scale here in NYC too. Who living and voting in this neighborhood WANT these great old houses torn down?