Figure it's time to look in again at 532 E. Fifth St. between Avenue A and Avenue B. Curbed had an update last week on the 10-unit apartment building. Here it is as of yesterday: 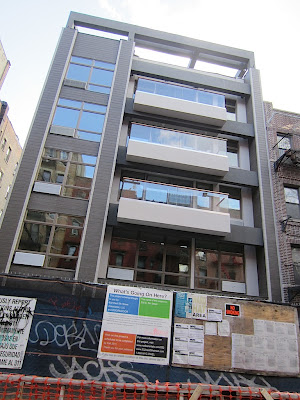 That listing is no longer available as of yesterday on Streeteasy. There is an active listing for a unit at $5,695.

The listing at No Fee Rentals notes, "The East Village attracts people not only for its diversity, but for its relatively affordable rents. The East Village is also known for its nightlife — a must see is Saint Mark's Place, which is famous for its many clubs, bars, cafes, and restaurants."

In February 2011, someone affiliated with the project told us that the owner of the brownstone that once stood here wanted to rehab the building, but there were serious problems with the foundation.

Or, as a piece in Real Estate Weekly put it yesterday: "The project began as the restoration of a brownstone, but the structural integrity of the building made it cost prohibitive to save, so the complete removal of the building was necessary."

According to that article, Jakobson Properties hired DOORtoDOORrealty, the Staten Island-based development firm, "to ensure the property adds to, rather than detracts from, the neighborhood's attractiveness and pride."

What do you think? 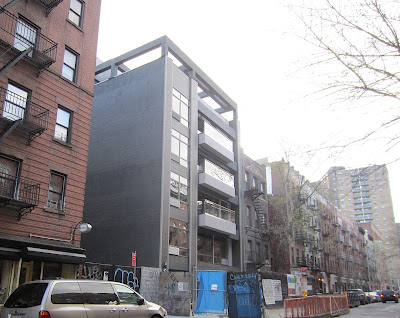 And from our archives, a few photos of the demolition and subsequent construction... 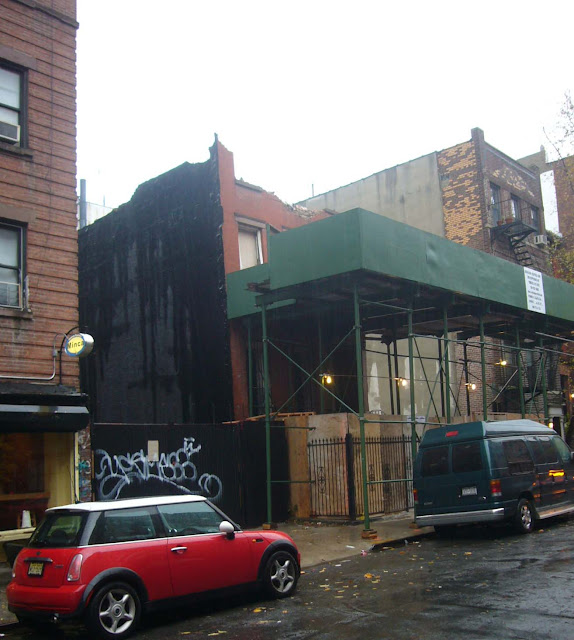 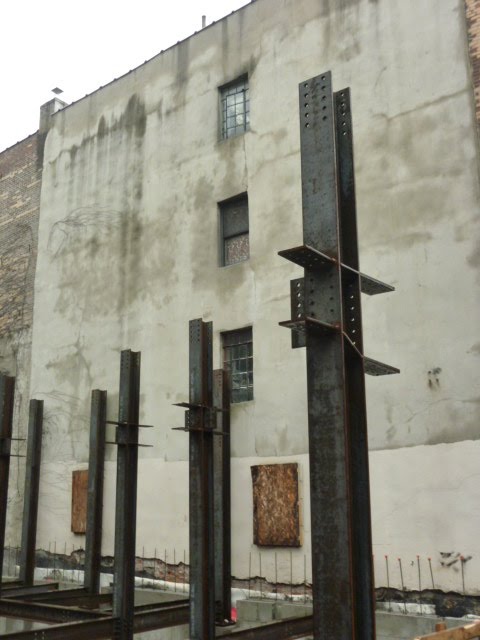 On the way: A five-story apartment building for Fifth Street
Posted by Grieve at 6:53 AM

I walk past that thing a few times a day and somehow it doesn't add to my neighborhood pride or perception of its attractiveness. If that debris-gray structure is the final product, I think it's an eyesore. Those balconies and windows don't fit in with the rest of the block at all. And I bet the neighbors can't wait until late-night rooftop parties start...

Pride (In the Name of Fifth Street)

This couldn't look more out of place on this block.

Oh yeah, it fits right in.

if they can get 68K a year for a 2BR on 5th Street we are all fucking doomed.

"to ensure the property adds to, rather than detracts from, the neighborhood's attractiveness and pride."

I used to live next to it during the demolition. It was hell and I still wonder what I breathed in.

small step up from typical east block architecture of the former USSR.

Word on the street is that these units have been pre-rented thru the NYC student housing office for almost a year now for high-end student housing. Take it as gossip, which is what it is, I have lived within 100 feet of this site for 25 years and have ears everywhere. Believe it, 90 percent reliable sources.

Ps to anon who claimed demolition was hell I live right there that small brick building was pulled down by a tracked excavator in 2 days with very little noise or fuss, what was your problem. Hey ps great east village artist zito used to live in that place back in the day!

Jakobson Properties must own that whole block. I lived at 518 for 10 years until they forced me out so they could completely redo the apartment they hadn't bothered to do anything to for 10 years and charge twice the rent. That building definitely does not fit that block. The building next to it and the one across the street were squats 20 years ago.