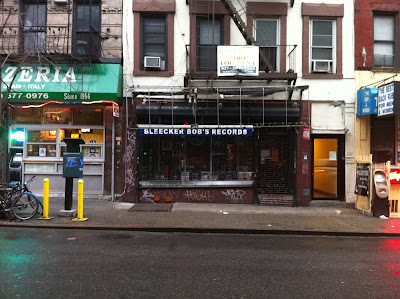 The folks at Bleecker's Bob's continue to look for a new space... The longtime record shop is closing on West Third Street at the end of April... they've been scouting locations in the East Village and Lower East Side...

They looked at a space on Avenue A at Fifth Street but, according to a Facebook posting, "the landlord cared too much about personal income (which if you've ever worked at a record store is almost nothing) and wanted a person rather then the company to sign a lease so that's a NO GO!"

"Unfortunately it looks like we're running out of time."

However, last night, Bleecker Bob's updated the store's Facebook page... They have a few more spaces to check out. There's also talk about a benefit show the last week of April.

"Please email us here if you'd like to help out with the benefit or if you see any available storefronts. Your continued support is greatly appreciated."

Previously on EV Grieve:
[UPDATED] Let's help Bleecker Bob's find space in the East Village
Posted by Grieve at 6:35 AM

Have they looked at the space on E.3 Street where Hospital Productions used to be? That has both up and downstairs and I know the rent is a bit more manageable.. I would love to have them on my block!

Check out a space at 84 e.10th street between 3rd & 4th Avenues - currently plywood shed up but used to be a japanese restaurant downstairs and the clothing store 99X upstairs...

Bleeker Bob is asking for help??
Good luck.I stopped going there YEARS
ago because of the crazy prices and
he was such a crank.

Which Ave was that? Probably Ave A, in the former pharmacy spaces. Those have been sitting empty way too long, you know they must be asking for some real dough.

Ugh. Yes, Avenue A! The A would have been helpful!

Why is everyone so upset this place is closing? The prices are way to high, records that they are asking fifty dollars for I could buy online for a few bucks. Even if the store's rent was reasonable does anyone even buy anything in this place? They should move, keep there sign, lower the prices and I'll shop there. The owner shook me once because I asked him to lower a price on a record.