Updated: Live look-in at the CB3/SLA meeting; 200 Avenue A denied 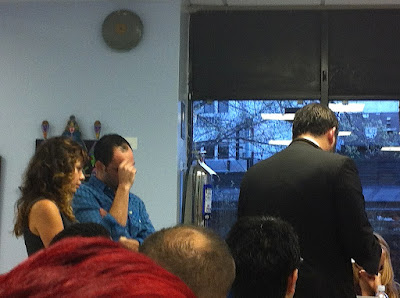 One of the agenda items tonight at this month's CB3-SLA committee meeting — Bikinis at 56 Avenue C. Petrit Pula, one of the principals for what he called a Barcelona-style eatery that will serve a type of sandwich from coastal Spain, shared details with us here.

By Shawn Chittle's account, 13 people tonight spoke out against the proposed establishment, including seven from 56 Avenue C. There were three who spoke in favor. The Bikinis folks were looking for a closing time of midnight on weeknights; 2 a.m. on weekends. Per Shawn, CB3 said they'd approve midnight seven days a week, but the Bikinis folks balked at the reduced weekend hours.

The committee unanimously voted against the proposed art gallery-restaurant at 200 Avenue A, the former Superdive home.
Posted by Grieve at 8:08 PM