Several readers have noticed that Sa Aming Nayon, the Filipino restaurant that opened here between 12th Street and 13th Street last June, has been closed of late... here it is last evening... 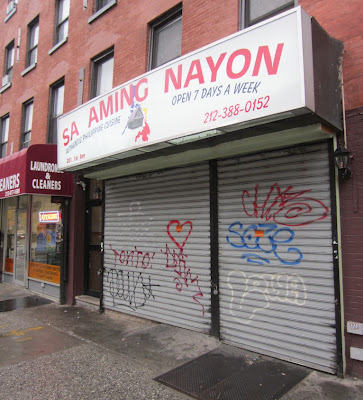 ... with these dishmachine notices on the rolldown gate... 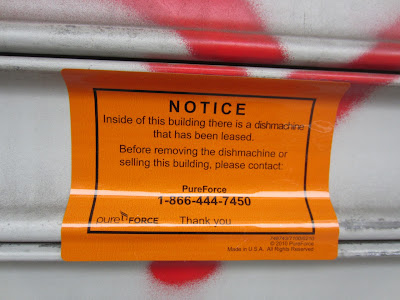 It took over the space when Wai? Cafe moved to Avenue B. Readers had mostly positive comments about Sa Aming Nayon. Perhaps too ambitious at the outset? They were also open for breakfast.

Anyway, perhaps a Filipino resurgence isn't going to happen (And RIP Elvie's Turo-Turo, Krystal's Café and Pistahan). Still, we hear a lot of good things about Maharlika down First Avenue at Seventh Street.
Posted by Grieve at 6:33 AM

The much beloved Krystal's Cafe 81 is a Filipino restaurant, well, more of a bar perpetrating themselves as a [Filipino] restaurant (for the full liquor license).

Good food and nice people at Sa Aming Nayon. However, the price was somewhat not inexpensive as the ones from the former Elvie's, Pistahan, and Krystal's. Most Filipinos would go to Woodside, Queens for the authentic and less expensive Filipino cuisine.

Also, and unfortunately, the neighborhood has changed and, as a frequent topic here, the people-- the new locals and the transients-- would rather go to that new hip trendy spot. And that's how Maharlika is still in business, it puts a spin on the traditional Filipino food and caters and markets itself to the foodies and hipsters.

Ugly Kitchen, I believe, once served Filipino food, or its current menu has some sort of Filipino food influence or some fusion in it. It keeps changing its menu to also cater to the trend-spotters.

What does the dishmachine sticker mean?

Ate at Sa Aming Nayon a couple of times. The people were nice, but the food wasn't very good. I know a couple of Filipinos who tried it once and never came back. It does seem to be a tough neighborhood for Filipino restaurants, though, probably because the rents are so high.

Was just at Sa Aming Nayon on April 12th celebrating a birthday, and there was no indication in the chit-chat we had with the staff that they were going to close. Sad to see it go since I live across the street, but the food / menu was so-so and the service left something to be desired for what the prices were. They also never had tocino every time I wanted to eat tocino. It's not just a breakfast food, people!

The Sundays-only pop-up at Ugly Kitchen is called Bar Kada (http://eastvillage.thelocal.nytimes.com/2011/12/12/on-first-avenue-one-filipino-pop-up-pops-up-next-to-another/). As far as I know, it's still going.

The food at Maharlika, while not traditional Filipino, is really really good. Even my mother loved it!

Yes, the Ugly Kitchen Filipino cuisine pop-up is called Bar Kada and is still going on every Sunday; the chef is a friend and business is going strong!

I used to love Elvies. It was so cheap and good. Sa Aming Nayon was decent but somewhere between opening and its demise the prices doubled and I stopped going there altogether. It really is a shame though. They were very nice. Oh well, thank goodness I can cook my own Filipino food.