The rent for the Lucky Cheng's space

A few weeks ago, Eater reported that Steve Kamali Hospitality was looking for an operator to take over the Lucky Cheng's space on First Avenue at East Second Street.

At the time, we couldn't find the listing... here it is, though there isn't a mention of rent... 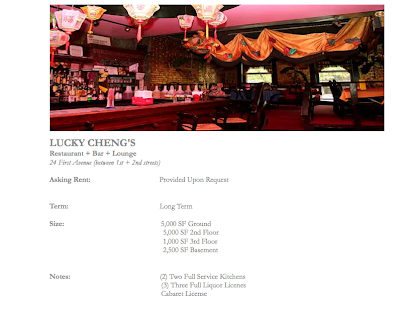 A tipster with knowledge of the lease told us the asking rent: $40,000 a month for the massive space that includes two full-service kitchens, three full liquor licenses and a cabaret license.

On April 10, owner Hayne Suthon told us that there are several interested parties, but no deal yet. She plans to leave the space for Midtown in mid-July.

For more on the history of the space, visit Jeremiah's Vanishing New York.