Well, Caffe Buon Gusto does, indeed, live on Avenue B at East Fifth Street. We first reported the Italian eatery's incoming arrival in June 2009. However, through the years, the space became dormant, serving as a makeshift shelter and a canvas.

In fact, it is almost one year to the date since we last saw the gates open. Last week, though, readers saw activity inside.

Last night, multiple readers noted that the place was having its grand opening this week. (Last night looked like a family-and-friends evening, per one reader.) Workers were busy fixing up the space for the opening... 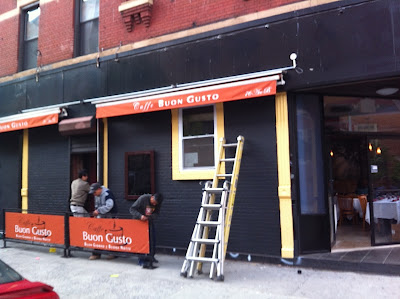 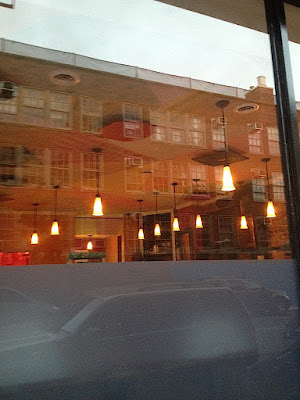 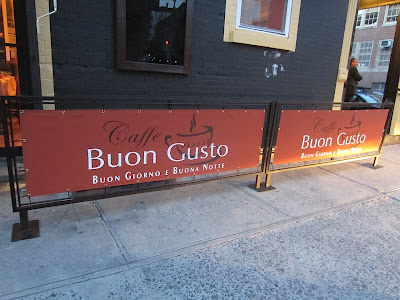 ...and here's the menu... they'll be opening for lunch too... and it looks as if they have a sidewalk cafe on the East Fifth Street side ... 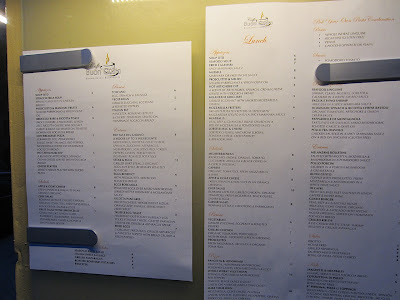 A reader said that they are related to the Caffe Buon Gusto outpost on the Upper East Side.
Posted by Grieve at 6:32 AM

Do my eyes deceive?
Is this place... affordable??
Wow! Will have to check it out!

Not snarking for snark's sake, but...I give it 3 months.

Wow. The menu does look affordable. How rare in the East Village these days! I am going to give the place a try. If anyone gets there first, let us know how it is.

Been curious about what would open here for the past 3 years! Walked by tonight, grabbed a menu and met the manager - so nice. Will probably have dinner there tonight and blog about it. PS - it's BYOB!