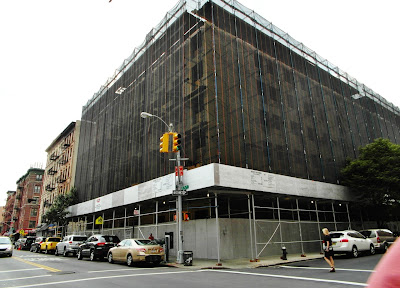 As you know, work continues on converting the former Cabrini Center for Nursing and Rehabilitation into residential apartments on Avenue B and East Street via developer Ben Shaoul.

Meanwhile, a tipster notes some late-night activity behind the building, where the construction staging is taking place. The tipster notes that construction usually takes place between 7 a.m. and 5 p.m. (and with permit, on Saturdays). Recently though, a few workers returned at 8-9 p.m. Now, a few more developments have made our tipster curious.

To begin, they've covered the gate with plastic sheets (perhaps to keep out the wind) but also obscuring the site from any onlookers from outside on the street.

Of more interest though, there have also been several unmarked white vans after hours. Most suspicious was [Tuesday night], because this was the latest and largest vehicle I've seen yet. I heard the bang of the truck gate opening at 2:30 am.
There was a large unmarked white truck with a few non-uniformed men in dark clothes.
There was also a red truck and a beige minivan — one of the vehicles belonging to a man in a white shirt.

They were in and out in less than half an hour quickly moving garbage bags. This is odd because there is a large dumpster right beside the truck that could have been used or a garbage disposal service could have been hired. Perhaps it's just my imagination and there is nothing to hide and its merely waste materials that need to be specially delivered to the dump. Yet its still suspicious that they would do this after hours — especially after midnight. 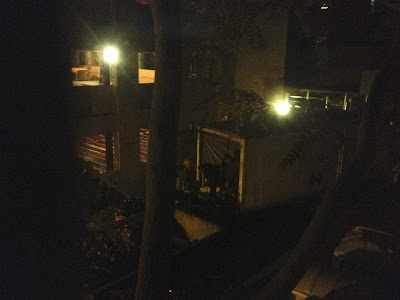 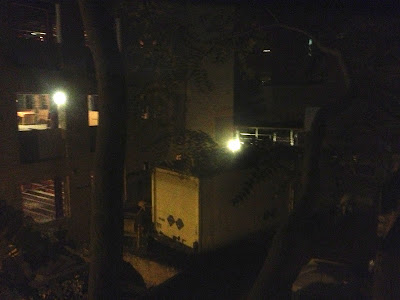 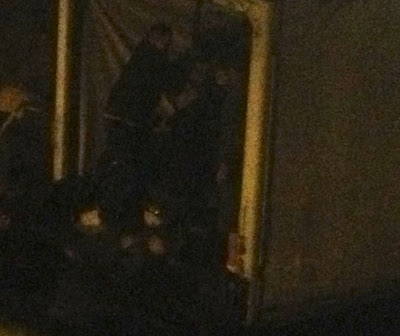 Previously on EV Grieve:
Cabrini Center patients out by the end of today; closes for good June 30

I would be concerned that asbestos abatement is being performed without the proper approvals, oversight and protections being in place. Contact the D.O.B., D.E.P. and OSHA immediately. Do not delay.

It's either hazardous building materials (i.e. asbestos) or hazardous medical waste. Either way, take pics and call the police. There is no reason for any work crews to be there at night so report it as a break-in.

It's pretty obvious that it's asbestos removal.

Aliens. Or the CIA. Or CIA-employed aliens.

Everyone please report this SOB to 311
http://www.nyc.gov/apps/311/allServices.htm?requestType=listService&filterServ=Complaint&serviceName=Building+Construction+Complaint&intentId=3C132E8E-8138-11DE-8E9F-96DAE110FEB8

How about alien-employed CIA? Haha.
I know that it makes me sound paranoid.

But when random guys in unmarked cars are regularly moving stuff late night in front of your window, it's a little suspicious.

Remnants of the East Village.

Tipster: I'm sorry! Didn't mean to make fun of you; this certainly does look suspicious. Just some humor given the imagery that nefarious unmarked white vans and black-robed people bring up.

The other commenters are probably correct in their assessment that it's asbestos removal; they're definitely right that you ought to notify the authorities if you see this happening again.

Sorry for the misunderstanding!

Also contact Rosie Mendez's office. They can be helpful making sure developer's play by the book.

Are you kidding me, Rosie Mendez won't do anything, and her staff is lethargic.

@dwg
how is she helpful about developers playing by the book. Part of the reason we are in this mess is because Rosie Mendez ignores everything. Residents have begged Ms. Mendez for help since she took office, and she has ignored and abandoned our entire community. Matter of fact she adds insult to injury by taking money from local landlords and businnesses whose main objective is to gentrify by pushing every artist, bohemian, activist and working class person out.

To abrod:
No don't worry about it, I thought it was funny and wasn't upset!

And I think everyone is right that it may be unsanctioned or semi-illegal disposal activity.

From the story behind Cabrini's takeover, its obvious these developers don't have the interest of the community in mind, or a strong sense of morality.

It looks like the covered fence gates are not for safety or wind reasons after all.

They have just spray painted the plastic covering black to keep prying eyes at bay.

Definitely report it. Could also be tool/material theft?

Everyone knows what they kept in the basement of the hospital, chained down. The movie "Deadgirl" was not fiction.

Sounds illegal to me- makes no sense that they would do this at 2:30AM- it's either theft or illegal dumping of some kind. The gentleman are not wearing protective gear which is worrisome if they are dumping hazardous items. So maybe they are stealing some equipment or metals that they will resell.

You people need to get a life. This is how the real world works .

I know I don't need to tell this group, but since the owner is Benjamin Shaoul any and all acts illegal, immoral heartless and dangerous acts can be expected, poor fools that think paying outrageous amounts to him will protect them from his abuses! Why Why Why did they sell this building to him? I can't believe there were no other options.

I live across the street, one morning I woke up at 3am to the sound of them using a saber saw cutting wood, I could see the two men and the laser on the saw, its was terribly loud and really angered me. I must report this.

i bet they are stealing something valuable to sell it at a junk yard?

please post a follow-up, if there are any follow-ons?