This was the scene outside Tompkins Square Bagels late yesterday afternoon on Avenue A... 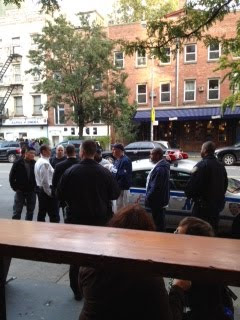 Later, on the phone, owner Christopher Pugliese explained what happened. On Tuesday, TSB received a delivery around 12:40 p.m. During a lunch rush, the staff didn't notice that the vendor didn't close the basement doors on the sidewalk. That's when a man apparently walked down into the cellar.

A TSP employee entered the basement and spotted the man, who claimed that he was a city inspector. The employee went upstairs to find Pugliese. During that time, the man quickly left.

Upon closer inspection yesterday, Pugliese noticed that several small items were missing, most notably a laptop. The police who responded to the call said that they have been on the hunt for a man who has allegedly robbed a handful of other local restaurants.

The NYPD told Pugliese that the man captured in TSP's basement surveillance cameras is the person they are seeking to question in connection with the other robberies. 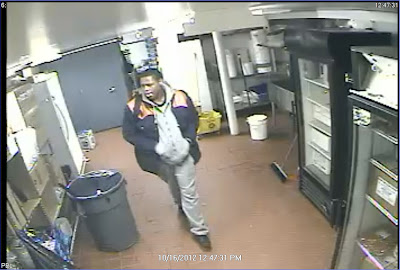 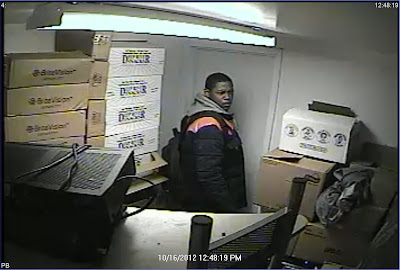 Said Pugliese: "Police say this guy is fearless."
Posted by Grieve at 6:45 AM

Damn! Our regrets to TSQB- and our thanks for the super-clear surveillance photo, which is being forwarded around to our staff post-haste.

Police said he will walk right into a A busy restaurant and just start taking things. If he's stopped by anyone he uses lines like ' oh, I was looking for a job application ,' or ' I'm looking for my friend who works here.' He also swiped a knife from us so I'd be careful if around him.

Ahhh, the smarts of some criminals. Smile for the camera. See ya soon.

So sorry to hear! Hope your things are recovered and they catch the guy- glad no one was hurt. Yikes!!

Kudos to you on the quality of those surveillance cameras. I always am flummoxed by banks and others who have cameras of such poor field and clarity when these days those cameras cost relatively nothing.

this makes me so angry! glad everyone is OK and relatively little was taken.

The people at TSB are so friendly, so neighborhood orientated, what a terrible thing to do.

Unfortunately I see people like this all the time. They walk up and down the Avenues looking for anything that isn't tied down. I've seen them checking bike locks in the middle of the afternoon on a bustling sidewalk. They're fearless.

I hope the cops bust this guy.

So sorry to TSQB - a great addition to the EV!

Flawless photos. They'll catch this guy. To anyone who recognizes him, do not confront him. Just track him and call the police!

I love that shop! Great mentality and food!
I can't stand going in there on the weekens though, it is the most bratty yuppie suburban crowd for some reason.

Hopefully they find a way to move the line along! But for now, good luck with getting this freak.

Thanks to everyone for all the kind words. I wouldn't worry to much about this guy as only one of two things is going to happen in the end. A) the cops will get him. Or B) He will learn first hand that the Rocco Sac is much more than just a Tompkins Square Bagels specialty sandwich .

@Bagel Guy: Give 'em hell! You rule! I love your attitude!

I've encountered this jack ass. He uses every excuse in the book, when i threw him out he called me a racist.