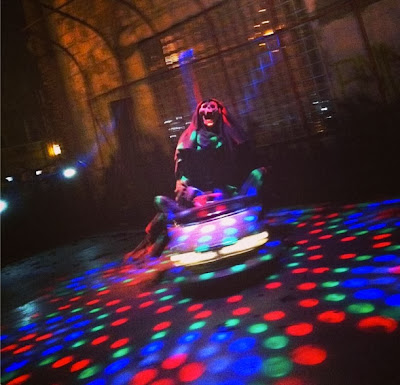 As you may have heard or seen, Bansky's latest street installation is on East Houston and Elizabeth ... at the site of Billy Leroy's former big tent.

The above video of the Grim Reaper Bumper Car comes from the official Banksy site, which includes an audio guide. (Banksy labeled this Bowery on his site.)

Catch it while you can, I mean, if you want to. Tonight through Sunday, dusk until midnight, apparently.

Find more photos, and what not, at Gothamist... BoweryBoogie ... and AnimalNY, who posted this video...

We reached out to Billy Leroy for comment... he is currently in Los Angeles... enjoying the start of the third season of "Baggage Battles" on the Travel Channel.

He said he was unaware that Banksy would be using his former Billy's Antiques spot for this installment.

"I support art and I like Banksy's work," Leroy said via email. "A year and a half ago we did the whole Death thing and buried the old Bowery with music. It's a compliment that a world-class artist would do a similar idea. The ghosts of the old Bowery told me they are still happy,
but will never allow anything to be built on that spot."
Posted by Grieve at 9:52 PM

A fitting tribute. This one moved me.