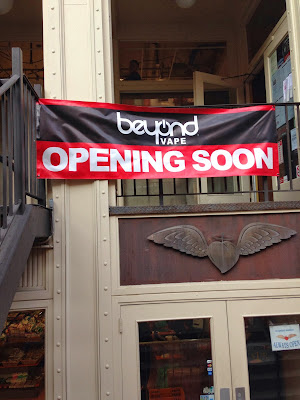 A Beyond Vape store is opening on St. Mark's Place... up where that Supercuts was, you know, by the Chipotle.

Anyway, Beyond Vape has three California shops... this will be the first location on the East Coast... for all your vaping (inhaling nicotine vapor) needs, such as tubes, cartridges, batteries, atomizers and the water-based liquid that contains the nicotine. (No word if you will be available to vape on the premises here... like in the California shops...)

Now! Is vamping safe? Or, safer than cigarettes?

Dunno! Here's what the Journal of Fun, aka, Bloomberg News, had to say about it in a piece titled "Vaping May Be Hazardous to Your Health:"

U.S. consumers will spend $1 billion on battery-powered smokes this year, 10 times more than they did four years ago. Are e-cigarettes, which come in such flavors as chocolate and butter rum, a benign device to help people stop smoking? Or are they just a new way to feed an old addiction? How safe, compared with tobacco smoke, is the vapor they create?

No one knows. The small studies that have been done so far hint at both pros and cons; one found that smokers cut back on real cigarettes after trying the electronic kind, while another found particles of metal and silicates in e-cigarette vapor that could cause breathing problems. That there are more than 200 brands containing varying levels of nicotine and other substances only makes it harder to assess their safety.

Can't be any worse for you than a haircut at Supercuts!
Posted by Grieve at 5:00 AM

Michael Bloomberg is a prig, about as fun as a ground glass enema. I cannot wait until his whiny voice is no longer heard around this city.