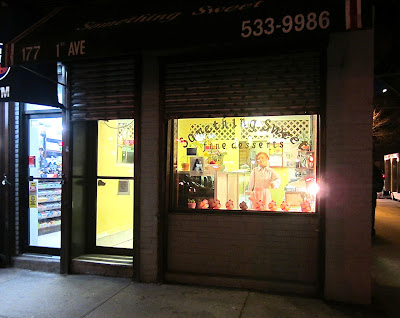 [Something Sweet from February 2012]

Community Board 3 released the agenda for next month's liquor licensing committee meeting... which is split over two nights — Nov. 18 and 19.

We'll take a look at the whole rundown later... until then, three items of interest ... three new liquor licenses for addresses that were previously not bars/restaurants ... for the time being, not much is known about the applicants...

There's an applicant looking to take over the former Something Sweet space, the family-owned bakery at East 11th Street.

And there's an applicant eyeing the former family-run pet store on East Second Street between First Avenue and Avenue A. They closed in August 2012.

And the former M&M Variety Hardware between Houston and East Second Street looks to become a bar/restaurant serving Mexican fare... the applicants had previously looked at 1 Ludlow St. 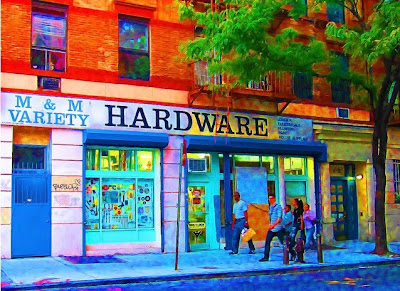 It's wonderful to hear they all want liquor licenses. We don't have anywhere to drink in the East Village right now.

Oh come on with the bars already! The neighborhood is a goddamn zoo on the weekends because of the bars.

Let's support these future bars! Cuz who needs bakeries, hardware stores and pet supply stores!? Pssh! Liquor is where it's at!

Saw these dudes who want this Mexican thing lookin through the windows. Typical douchey nightlife types. Not foolin' nobody!

And I guess the family-owned stores brought the drug dealers in the neighborhoods and they must now be replaced by a bar, a bar, and a bar, to "clean-up" the neighborhood. With that logic, no wonder why this neighborhood needs more liquor. One need to keep deluding themselves or numb themselves from reality. Let them eat alcohol!

Margins are getting thinner, costs are going up up up, and the neighborhood is already oversaturated with them, so why not open another restaurant in the EV? That doesn't sound like high risk investing at all.

Having attended the CB3 Board meeting this week, I was stupified to hear SLA committee member Palitz say that we all agree that the neighborhood has a big problem with the over-saturation of liq. lic.'s, and that She wants to work with residents to solve this problem. I don't know why anyone on the planet would trust someone who was on this committee when it created the problem to be the one to solve the problem, but... Here's Her Chance.

If, has she says, we all agree that there are too many liq. lic.'s, then why not make it policy to only approve a new license when a current licensed establishment closes down. That way residents would be assured that at the very least the problem will get no worse. Then, the Board can begin work with the residents to find a way to have fewer licenses. Get one, give one - seems far enough to both sides.

And all this says a lot about what our society has become, too... I'm also upset by the loss of regular small businesses, pushed out by high rents. However, I wouldn't be so mad at all the liquor licences, if people were going to a bar / restaurant and simply having a drink or two. But people who attend these establishments drink themselves into oblivion and wreak havoc in our streets. How has this become the norm? Sad.

And this is why Empire Biscuit, opening on Avenue A proudly declared it caters to drunks in its tag line, now splashed across the front window of the place. It makes me sick to see these young guys could care less about their neighbors but that's the attitude in the new East Village and they're probably going to make a killing with this strategy.

I am involved in the project in the old hardware store. We are not opening a nightclub we are closing at midnight on the weekdays and 2AM on the weekends. We are serving Mexican fare with a sit down family friendly environment. Currently there are several vacant store fronts on both sides of the street. In fact only 1 open business, a wine store on that side of the street and a Barber shop and waffle place on the other. If these commenters had there way this block should stay vacant? A shuttered LES is what you are looking for. Stop standing in the way of peoples ambitions. Small businesses are what makes this a neighborhood. We are NOT opening a Croxley's type venue. I guess you would all rather have a chain then a small business run by your neighbors. *I am not a "Typical douchey nightlife type" And I don't appreciate being called one.

The EV/LES has been a premier bastion of night life for decades. Just when did you think you were gonna roll in and magically change that? And, because youve got the money for a seven digit, new apartment here? Are there not enough Starbucks and & 7 Eleven type places for you here? Family businesses have been leaving the inner cities for a long long time, driven out by the Walmarts/McDonalds of the world, not by bars/clubs,restaurants. Read a book about it! Its NEW YORK CITY. if its not your speed, fine, move to another of tens of neighborhoods in the city that are more peaceful. Stop crapping on the rest of the folks that make a living and live happily in the area. It isn't designed to be the godamm suburbs. Sounds like most of you would be happier SOME PLACE ELSE!

@Anon. 11:51 - first, you're REAL late to this party. You obviously have not lived here that long, but equally obviously feel the need to tell those of us who have lived here probably longer than you have been alive what the neighborhood was like many years ago. Trust me, it wasn't until the 1990s that the EV started to spiral into an out-of-control party city; prior to that you pretty much had a handful of old blue-collar Polish bars, hardly the destination of choice among the trendy set, and a few new joints; but it was certainly not the wall-to-wall alcoholic carpet we live in today. Second, JUST SHUT UP WITH THAT TIRED CRAP ABOUT LEAVING NY IF WE DON'T LIKE WHERE IT'S HEADING. You don't like hearing us complain? Then YOU leave!

Thanks to our Community Board's complicity with greedy landlords pushing rents up so high that only high-margin businesses can survive, the binge drinking rates in the a Village are now among the highest in the city, close to 1/3 of all adult residents report binge drinking compared to about 20% citywide. And that's not including SantaCon and the imported debauchery that happens down here each and every weekend. Big thank you to our short-sighted Community Boards and our enormously greedy landlords for turning us into something that looks more like Russia just after the fall, where alcoholism was rampant and cut life expectancy of adult men down to third world levels.