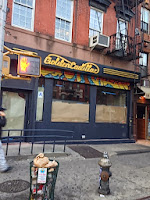 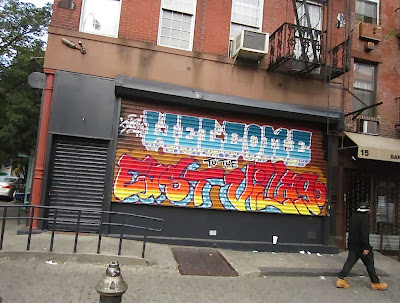 Previously on EV Grieve:
Boca Chica apparently won't be reopening on First Avenue; and the return of Golden Cadillac
Posted by Grieve at 5:01 AM

great, classic mural. whatever happened with bloomberg's bullshit ban roll-down gats that you can't see through? hopefully that got blocked.

"The bar's aesthetic takes its cues from the "sad glamour" of a seedy late-70s dive bar, furnished inside with wood paneling and patterned wallpaper mixed with mirrored surfaces" - so essentially this place is trying to replicate either a Tad's Steakhouse or one of the real bars that used to exist in this neighborhood before being driven out by pale imitations like Golden Showers - er, Cadillac. Only in New York, kids, only in New York.

so you have a Dominican who spent a couple of months in the Philippines and is now an expert chef in a Filipino restaurant* (*which is really more like a Filipino themed restaurant) cuisine (which is akin to that French resto opening in the Bowel-y with an Irish chef), opening up a 1970's themed bar that probably only knows about the 70's by watching Shaft.

Miami Vice? That was in the '80's. Did they have 'knish fondue' and a 'Monte Cristo' in the 1970's. More like the 70's (streets) in the UES and UWS. So, much like Jeepney, with its clichés, bias, and silliness about Filipinos, this "70's" bar would also be as banal.
With EV being the new midtown, it is now also the new Times Square.

Geez, it's not like it's Applebee's! I think it sounds kind of cool, and I'd certainly rather have that empty space being used for something!

Where have you been? The Vegas thing is old. The damage is already done. It's called Hell Square, Avenue C, The Bowery and....you get it. Residents have been fighting tooth and nail over the past six years despite the victimization from the community board and residents who don't see much of a problem. It's like the David Byrne essay. It's about six years too late. You really can't blame residents for being passive. I mean if you want to have a life then ignore the situation. You haven't. Blogging is a good form of activism. I'm just trying to say that people have been sleeping.

It is better than an empty space,bank, Starfuck's, or 7-11, but it's still bizarre.

Only a hipster who has never been held up at gunpoint could get nostalgic about "seediness".

Sounds too concepty even for this douche neighborhood.

I wish they would open a Tads Steak House there.

I have no idea if this "Dominican" is a good Filipino chef, but there is no requirement that any chef live long-term in any country to be considered an expert in that nation's cuisine.

There's no requirement alright, but it's not authentic and just an insult and a slap in the face tothe nation's cuisine if one purports himself/herself to be an expert just because he/she has stepped foot in that country. Regardless, this 70's themed bar is akin to that. Also, why do you think Pulino's failed? And now Mcnally's going to have an Irish chef at a french restaurant. Good luck to all that.

Instead of wasting our time commenting on this ill conceived business let's discuss what will inhabit this space following Golden Cadillac in 2 years.