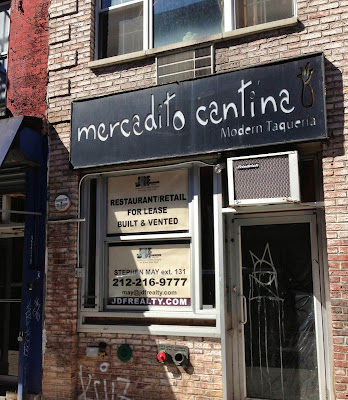 Just noting the recent arrival of a for lease sign at the long-vacant Mercadito Cantina space on Avenue B between East 10th Street and East 11th Street. Mercadito's offshoot closed in January 2011

The guys behind Ditch Plains had hoped to open a lounge called The Asphalt Jungle here ... However, in April, the CB3/SLA committee voted to deny the Asphalt Jungle application during a rather ugly meeting. (Read about that here.) ... and the owners reportedly decided to scrap their plans for 172 Avenue B. 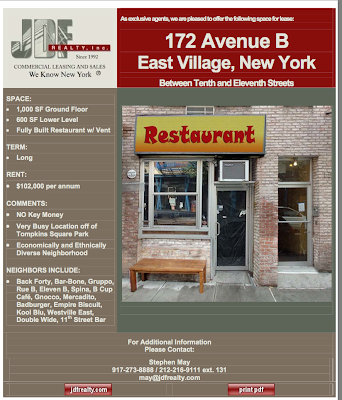 Previously on EV Grieve:
About Mercadito Cantina closing:'Open letter to EV Grieve and CB3' (58 comments)
Posted by Grieve at 5:00 AM

10k a month for Avenue B??? What business will be able to sustain itself?

It would be interesting to get the answer to THE NOTORIOUS L.I.B.E.R,A.T.I.O.N.'s question from the realtor and landlord.

Actually it is $8500 a month which is not bad considering it is built out already with a kitchen and a vent.
The key is getting a liquor license!
Putting a vent in a kitchen is REALLY expensive lke about $15 grand per floor!!

I read that wrong. (It was early.) Still, that's a lot of money for Avenue B. I lived on 11th / B a few years ago and there isn't a lot of foot traffic there.

There's the answer! Buried in the listing! It's an avenue away from Empire Biscuit! GOLD MINE!

I am the broker for this space and this is a good deal...yes the rent is about $100 per square foot but this is a built, vented restaurant in an area exploding with development. In addition, in order to be a success in this space a restaurant would need to average only $2,800 a day to make it and that is very doable in this location. This location 2 years ago was not nearly as busy as it is now, 5 years ago we were still hearing how Avenue B & C were evolving and 10-15 years ago it was still not a good neighborhood at all. Time marches on and rents only go up because tenants are willing to pay them...

Hey NOTORIOUS L.I.B.E.R.A.T.I.O.N why are you taking this listing so personally, it's a great space in a solid location and a realistic rent that will allow a restaurant to open without a lot of build-out $ or time. If you feel the deal is not for you don't call but you seem to be out of touch with Real Estate prices in the East VIllage at this time! By the way we are getting a ton of interest in the space and hope to have it leased and opened soon...

Hey Stephen, this is a serious question and I'm not trying to be confrontational. I wonder if the real estate market can really sustain the high commercial rents? To me it seems that a vicious circle is being created. Only a few type of businesses can afford these rents. High end boutiques, places that serve liquor and money laundering operations (see the glut of nail salons and fro-yo joints). Do you worry that you're creating a commercial "Dust Bowl"?

Be a Developer Not a 90 Pound Weakling! said...

Hey Amanda K, don't knock the money laundering operations just yet. The area has lost so many laundromats and many of the actual residents of this luxury development area are walking around with dirty underwear as a result. That's got to affect the cleanliness of the money we keep down there, so I say if we can get some money laundering operations going, so much the better. Don't you agree? I'll have a fro-yo latte while my nails dry. You take your time to reply, I'm in no hurry.

Stephen, I take few things personally. Real Estate listings are not one of them. The way blogs work is the author writes posts and people discuss them, sometimes, humorously. Again, having lived on that street and have seen many businesses come and go, I have something to add to the discussion. I'm sure it's a wonderful space that will rent with no trouble especially with someone as charming as yourself representing it.

Also close by is the very spot Nestor was puppet-napped. The case gained national attention and is a must-visit destination for true crime buffs. Don't tell me that never crossed Stephen's mind!

Notorious, I must have misinterpreted your sarcasm as bitterness! Your first comment about the space, I am working on leasing, was "10k a month for Avenue B??? What business will be able to sustain itself?", wrong price, knocking whoever may open a business there before they open. Another gem you followed with was "There's the answer! Buried in the listing! It's an avenue away from Empire Biscuit! GOLD MINE!" And you are not an expert on current retail rents on Avenue B and/or 2013 neighborhood demographics simply because you "lived on 11th / B a few years ago" I will say, you certainly do add to the discussion...

I live on 11th btw B & C, and there are more families living on this block than you might assume. Basically there's 11 restaurants on Ave B between 10th and 12th Streets. Adding another restaurant/bar to the mix, ugh. I do agree the rent seems awfully high considering there's so much competition for patrons. And I bet whatever the liquor license is, there will be a restriction for pub crawls.
I wish someone would open a toy store, a shoe store or something useful for our neighborhood. We don't need another restaurant.

I wasn't knocking any business moving into the space, quite the contrary. It must be tough for businesses to find a customer base when the neighborhood is primarily made up of college kids on a budget and transients, never mind a business located on Avenue B. But this shouldn't worry you because you have "tons" of interest.

Wow, this space has been vacant for almost two years, what's wrong with it?

The rents are too damn high.