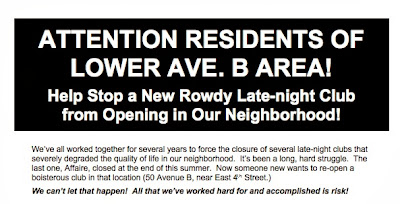 A restaurant called Brownstone Bar & Grill is on this month's CB3/SLA docket to take over the space last held by Affaire, the French bistro and lounge, which closed at 50 Avenue B last August. (Brownstone, whose CB3 application lists a menu of "Caribbean/Southern food," was originally on last month's docket ... but was a scratch.)

And Brownstone's possible arrival has sparked concerned neighbors to join forces to possibly speak out against a liquor license for the address. There are now flyers hanging in buildings and along Avenue B.

According to the flyer:

Help Stop a New Rowdy Late-night Club from Opening in Our Neighborhood!

We’ve all worked together for several years to force the closure of several late-night clubs that severely degraded the quality of life in our neighborhood. It’s been a long, hard struggle. The last one, Affaire, closed at the end of this summer. Now someone new wants to re-open a boisterous club in that location (50 Avenue B, near East 4th Street.)

We can’t let that happen! All that we’ve worked hard for and accomplished is risk!

• The place will be known as Brownstone Bar and Grill. It plans to feature 8 video screens, play recorded music both as background and as “entertainment”, and host special events.

Le Souk and Carne vale all over again!

Community Board 3’s SLA and DCA Licensing Committee will be considering an application by the operator for a liquor license at their next meeting – that will be our time to show up and speak out! You can read the full application here.

WHAT YOU CAN DO:

• Write a letter to CB3 to express your opinion on this matter. Be sure to personalize it, and to talk about your experiences with such places as a neighborhood resident. You can send it to the office, or email it to info@cb3manhattan.org

Neighbors are meeting with Brownstone reps on Thursday night. Here are details on that:

Come meet and ask questions of the operators

Some neighbors here between Fourth Street and Third Street still shudder at the mere mention of Le Souk, which finally closed in 2009 after a lengthy battle with the SLA. (Of course, there were those various mystery parties at the space in recent years.)

Some residents fear a return to the bonkerish partygoing along here last seen in 2004-2006... a stretch that Eater dubbed "Hellmouth" back in 2006.
Posted by Grieve at 5:30 AM

Email ThisBlogThis!Share to TwitterShare to FacebookShare to Pinterest
Labels: 50 Avenue B

oh no, something rowdy on our block! why did I move to the east village? to a block with a many other bars and some all you can drink brunch spots within spitting distance? definitely not to hear any music or eat different kinds of food. What would "the residents" be ok with cause this sounds better than Affaire and not 'worse' than Mama's or Croxley's?

Oh yes! I didn't move to the East Village for the bars as you can find those ANYWHERE IN AMERICA.

sounds like another sh**** place that will probably fail. so, not too worried.

sounds like another sh**** concept that will probably fail. so, not too too worried.

The problem is these shit concepts work in the EV now.

Many of us did not move to the EV, a place with many bars. Many of us moved to the Lower East Side (before it was renamed by Real Estate)--a place of political activity and community. Oversaturation is not historical condiditon here. It was a place for middle and low income people, including immigrants--and happily forgotten by the rest of the world.

Around here, nobody would dare shut you up for making noise.

I have been living in the area since the 1990s. I love trying new bars. I just don't like the trend of the new places that are opening. These places cater for the bridge and tunnel/ frat-boy crowd and not the people that live here. If the residents of the area do not want a new meat packing nightlife scene pop up where they live, they have a right to regulate the new places that open up.

@anon 8:47: I moved to the East Village in the mid-80's, when it was a haven for artists and creative types, not a shitstorm of bland suburban fratty bars and clubs where drunken bankers troll for date rape bait. That answer your question?

@Sammy - tell him straight up!

I lived here all my life, as did my dad, his parents and his parent's parents. Dopes like Anom 8:47 cannot even fathom the fact that people did not move here in the last ten years, or that living in a city means being considerate of your neighbors who have jobs and kids in school.

I swear, if someone ever says to my face "if you don't like the noise, why did you move to the LES?"....

Just sharing my perspective, as I have made some peace with the big changes, and I see that many others have not. I am here 25 years now, so not the most original original but pretty long. I will preface that I have no children, wives, or family living here, so it may be easier for me to say this and sort of 'give up' on the EV but #1 this neighborhood sucks now, and is only going to get worse, but #2 if you are here with cheap rent like me from being here a while you are getting a great deal anyway you figure it, and #3 I say it sucks but that is very relative, as a kid I grew up in the projects in Queens, Ravenswood and Queensbridge, and I was there when they transformed from a great place for lower working class families to live to a hell hole, and that was a RUDE awakening for sure, so I always do have to catch myself when I 'complain' about the changes the endless supply of rich NYU brats have wrought. So I say the sooner you make peace with reality the better off you will be, that's all. They are not leaving.

Unfortunately neighborhoods change. You don't have to live here.

Yes, neighborhoods changes, i have noticed that over the last few decades. However, that doesn't mean i need to move, it means these idiots need to show respect, and if they can't do that they get closed down for violating noise regulations. Yes, even rich, club owning a-holes have to obey the law. Telling me if i don't like it i need to move, is as idiotic as telling someone who has been mugged to stop whining, and that if he didn't like getting mugged he should not have moved into the city.

Anyway, if you want to spend $16 on some watered down cocktail, go for it, god bless, just keep it inside late nights, so you don't wake me, my wife or my kid. Listen, i don't go to your neighborhood and scream outside your door at 6am, i expect you not to come to mine and scream at 3am.

And no, i'm not leaving, i'll be here after all you d-bags finish your extended adolescences, get married and move back to the suburbs.