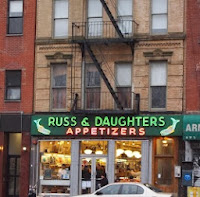 Word came down last month that the nearly 100-year-old smoked fish and herring store on East Houston was going to open a 65-seat café space around the corner at 127 Orchard St.

Today, The Daily Meal published a Q-and-A with fourth-generation co-owner Niki Russ Federman about the new space. Federman offered up several details, such as if the new space will have that counter culture of the mothership:

That is so critical in how we’re designing the space, trying to bring that counter experience and that human interaction to the new café. So there will be an open slicing area where you can watch the slicing happen, and actually you’ll be able to see it better than you can in the store. Right now you have to peek down poke around, There, we’ll have a slicing counter [and] an old-school soda fountain making our egg creams. There’s going to be almost like a luncheonette counter where you can sit down as you’re watching all the food come together, and you still have that over-the-counter interaction.

The Russ & Daughters Café is aiming for a mid-February opening.

Meanwhile, in other news about LES institutions, BoweryBoogie has a recap of the gallery opening at the The Space At Katz’s.
Posted by Grieve at 3:51 PM

Email ThisBlogThis!Share to TwitterShare to FacebookShare to Pinterest
Labels: Russ and Daughters

What a novel idea….. a wonderful place that has nothing but a positive impact on the neighborhood. A place that everyone can enjoy, from the people that live here, the weekend crew to tourists.

"So there will be an open slicing area where you can watch the slicing happen, and actually you’ll be able to see it better than you can in the store. Right now you have to peek down poke around."

Peeking and poking around maintains the mystique, and it used to be you didn't need to entertain your customers at a deli or an appetizing joint - the food was enough to keep them happy. What's next - a webcam in the microwave at Katz's so you can see the cheese melt on your Reuben?

If this wasn't by Russ and Daughters, I'm sure the place would have been derided more for being arty (no pun intended) and another café/restaurant masquerading as another joint to serve alcohol and cater mostly to the tourists and the moneyed nueva nouveau New Yorkers. But can't blame R & D for opening up this art space; they're just rolling in with the times, I suppose.

What art space?? It's a firckin sit-down deli counter.

Great to hear an old-time business is expanding. Wish them the best of luck!

A 100 year old family business is taking their store and basically adding a place for customers to sit and eat --showing the same hand slicing they do every day in the store. And some of you are complaining about it?! I applaud the authenticity and true history of 100 years that R&D brings to the neighborhood and I'm excited for the restaurant. Some things make the neighborhood better and Russ & Daughters is one of them.

I doubt their cafe is gonna be about pushing booze, so good for them. This strikes me as a smart move. Look at the lines of tourists outside Katz's on a Sunday morning.

Egg creams? Wow! have to get down there.