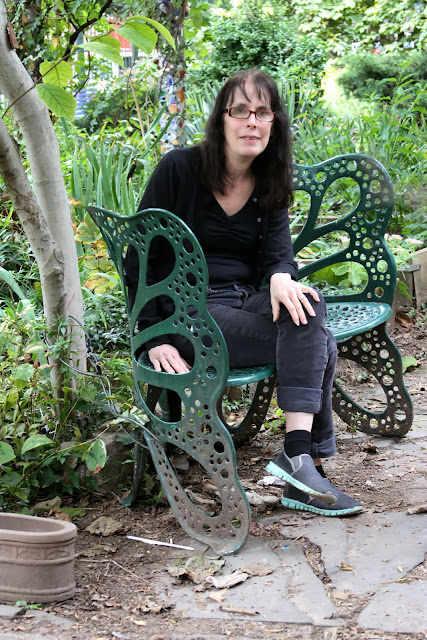 Beginning in 2005, we started to see a lot more redevelopment [in this neighborhood]. A huge glass hotel went up on the end of my street, the Cooper Square Hotel. We began to see the scaffolding go up around the buildings and then the buildings came down. That was when I started photographing like crazy, both on film and digitally. That was also around the same time the Cooper Union Hewitt building came down; I was photographing it every morning, photos that I eventually assembled in an accordion book.

I was looking at what was going on my block, East Fifth Street, and I noticed that there was a Federal house there, 35 Cooper Square, and it was still standing. I became very interested in Federal houses and the [older] architecture of New York.

In 2006, I set up a stand in front of my apartment building as part of the Art in Odd Places exhibit where I gave away my photo postcards. And I created a book with wooden pages that people could flip through to learn more about the architecture in the neighborhood. That is how I got my Deconstructing Bowery book together.

Eventually, I wrote a history of 35 Cooper Square from the time it was built in 1826, information that was used to help unsuccessfully landmark the structure, which was demolished in 2011. Even though there were major protests to save that building, the landmark proposal was rejected.

Another address I researched, 135 Bowery, which was built in 1817, had been slated for preservation and approved, but it was sold off to build “affordable” office space. In that case, just one council member had overturned the decision to preserve the building in order to provide the aforementioned offices, but the new owners lied, tore the building down, and immediately put the lot up for sale. In 2007, a group of other concerned citizens, myself included, formed the Bowery Alliance of Neighbors to preserve what’s left of the Bowery’s architecture.

I know that when artists come in, eventually gentrification follows, but today we’re talking hyper-gentrification. For instance, now there are areas on West Fourth Street that are so heavily congested with students that you can barely get through the block. I remember a few years ago before the big explosion of NYU, and there were signs up in the West Village that said, ‘Do you think this neighborhood is safe enough for NYU students?’ and I kind of wanted to flip that around and ask, ‘Do you think that the neighborhood is safe enough to withstand NYU development?’ I saw that question as a reversal, much before all of the redevelopment began happening.

The concerns of the newcomers today are far different from those waves of people who came to New York in past generations. We were involved with our community; most of today’s newcomers are not. We had rent strikes. We were committed. There were a lot of problems; there was a lot of crime. Most of those areas were just bombed out. We were under siege. All we could do then was work together. That’s around the time, in the early 1980s, when we stared creating the gardens like the Sixth and B Garden. While this is among the most protected of those green spaces in the neighborhood, others are still at risk.

In the 1980s, people bonded together, and that bond literally grew this neighborhood. Look at all these beautiful places that you can still enjoy. These days, newcomers moving to the neighborhood have slick, renovated apartments for which they pay a great deal. They’re often living with a bunch of people. But there are few among them who are actually fully invested in the East Village; instead they are in transition. They aren’t living here to put down roots. For years, I never saw a moving van on my block; now I see them all the time.

Joann Jovinelly is a freelance writer and photographer who still calls the East Village home.
Posted by Grieve at 6:45 AM

Yes as much as I am amazed by the group longing for the crack vials and shooting galleries. There is this disturbing factor in the EV and it's not a 7/11 its the super transit-ate population of stay a year or two and go; a viable neighborhood needs some residents that stay at least ten years to be stable otherwise it's one big Howard Johnson's this is important.

She's so right on about everything she said! And she looks so familiar; I know I must have seen her around. :)

Oh, and love this feature! Please keep it going.

What a fantastic person. I am glad to know there are still people like this living in the East Village.

Thank you, Sally, for all your preservation work. We need more people like you.

You are spot-on, Joann. 42 year resident here in same apartment. Just read that 6th & Bowery will be home to yet another NYU dorm. My apologies to the minority of good hearted kids who see their time in the EV as truly developmental & experiential. I welcome you. But the vast majority of your brethren are stone cold partygoers with no regard for we locals who will stay on long after your few years of "party hardy" have passed. Meanwhile, catering to your excesses has destroyed a real "neighborhood". The alternative, rich lifestyle that we low-income seekers of truth & light found here, and then stayed & helped stabilize this rough community, is all but gone. And the blame is on real estate(NYU being the primary)greed and opportunism. Shame on all of you interlopers for creating a cultural vacuum.

I second Bobby Gorman. Been on 9th and C 18 years. Slowly our neighborhood is dying and it dies each time a business that helped it grow through the tough times closes.

Yeah, I almost shopped at Kmart (gasp!) for some hardware items but thankfully Saifee's on 7th and 1st had all I needed so I didn't have to go anywhere else (Brickman's is close but a bit expensive for what I needed). Shop local and be good neighbors, my friends!

The real thanks should go to Sally, who is totally amazing (I learned so much!), and to all of you who see every day what we are losing and what we have lost. I have only been in the EV for about 14 years, but I am totally moved by the stories shared by my neighbors—the ones who made this corner of the world so special. For the first time, I am thinking about moving...For now, I will try to bring more stories like Sally's to the fore so we can more throughly appreciate our unsung pioneers.

Thank you, Sally, for this great interview. Important elements of the EV/LES community still exist and your words bring to light the preservation issues and the threats to these elements. Fortunately, there are community groups who are supportive of preservation in our community.