Plans for Brownstone Lounge and Grill on hold for now on Avenue B; Ludlow St. replacements go 0-3 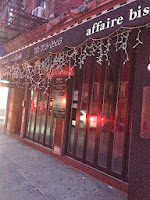 A quick note about Monday evening's CB3/SLA committee meeting. Members of the East 4th St. Block Association and other nearby residents had concerns about the applicant looking to take over the former Affaire space at 50 Avenue B (aka (240 E. Fourth St.).

Among other concerns, the applicant for the Brownstone Lounge and Grill apparently doesn't have any restaurant experience ... with a business plan that relies upon private party rentals of the basement.

As we understand it, in lieu of a likely denial recommendation to the SLA from CB3/SLA committee, the Brownstone principal withdrew his application (for now), and was told that he was welcome to come back with more robust plans for a restaurant.

BoweryBoogie reported that the principal is an IT business manager in Harlem and none of the investors have any track record in the nightlife/restaurant industry. Given the nightlife fuckery around here through the years (LeSouk and China 1, for starters), residents were understandably concerned about about any potentially noisy operation here.

Meanwhile! One other note... the applicants looking to take over three Ludlow Street mainstays didn't fare so well.

• Chicken-and-waffles restaurant Sweet Chick was looking to open a second outpost in the Max Fish space. As BoweryBoogie reported: "Residents of the 100-year-old tenement were ultimately worried that a fried food establishment in a 'porous' building would negatively impact quality of life." The committee ultimately did not approve this application.

• The committee reportedly convinced the applicant looking to take over the former Motor City space to temporarily withdraw his application. The Lo-Down described the new concept as a restaurant "featuring skewers from around the world." Oh boy.

• The committee also denied Artichoke's bid to take over El Sombrero's space, via The Lo-Down.
Posted by Grieve at 5:00 AM

I love how CB3 approved or let slip through all these mega-clubs, but they take a hard line with a couple of snack joints on an already noisy block

I'd argue Brian that Artichoke is more than a "snack joint." You've seen the shitshow on E. 14th Street right? This will be 1000x worse on this corner with the weekend drunks.

And the guy taking Motor City has plans for a DJ Booth. This will become a club, initially disguised as some fuckedup speciality food restaurant.

Artichoke Pizza: In the words of the Little Rascals, it might have choked Artie, but it ain't gonna choke El Sombrero.