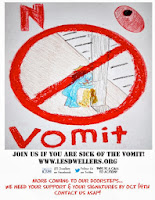 Despite criticism from Manhattan Borough President Scott Stringer, Community Board 3 will not reverse its decision about the suspension of block association group the L.E.S. Dwellers for the remainder of the year, The Lo-Down reported.

During its full Board meeting last night, Chairperson Gigi Li reportedly said that she would convene a group to draft new policies governing how the board works with block associations.

[B]oard member Chad Marlow proposed a motion to reverse the suspension and to mandate that future actions against block associations must be approved by the full board. But a vote never took place because, through the use of a parliamentary maneuver, the board voted instead on an alternative motion to table the original proposal, which if it had passed would have represented a public embarrassment for Li. Only Marlow and one other member, Julie Ulmet, opposed the “motion to table.” Three others abstained.

Find more details on the meeting over at The Lo-Down.

I'll look forward to reading the comments tomorrow morning to see which party gets likened to nazis first...

Any reality show producers out there? I would binge watch this train wreck on Netflix.

Good to know 2 members of CB3 have some degree of ethics. Didn't know it was that high.

Speaking of parliamentary procedure, I'll bet the citizens that live in CB3 would all vote that they have No Confidence in the leadership of the Board.

Looks like that stern letter from Scott Stringer really did the job!

It was Dominic Berg who made the b.s. parliamentary motion that saved Li's butt. The puppet-master protecting his puppet. How cute.

Agreed, Morgan, the whole executive board need to go.

Having attended the meeting, I can confirm that No Confidence is the right answer. Turnover for a fresh start is what's really needed on CB3. Many of the Board need to step down if they truly want what's best for the community, and it starts with Li. She was just awful, and if you saw her in action, you'd not want her representing you.

It's now officially on and the ball's back in Stringer's court.

He needs to hear directly from people in the neighborhood who are upset by this behavior from their community board. The more calls, the better. Be polite when you call.

Somehow, I feel as if this doesn't really affect me.

That was easy. Just called Stringer's office at the # left by Ken above, and someone quickly took my message - Community Boards should not be allowed to suspend any group, Block Assoc' or not. I recommend others call, too.

Jeez, if upstarts, outsiders, and crackpots are allowed to be suspended around here, most of CB3 would have to resign, and the East Village would be almost emptied. Everything admired about the EV was built on these sorts of folks.

There never should have been a Block Assoc' policy in the first place. Then, you can't suspend a group from something that does not exist, and this debacle would have never happened.

I didn't expected calling the BP to be so easy. Others should try it.

2:49 pm, this doesn't affect you because of your lack of empathy, a trait of narcissists. This also won't affect you until that bar opens up next to your building and you have to deal with the woooers and the vomits on a regular basis.

Can they make a one-sided "parliamentary rule" that only applies to their CB? I would think all CB's would have to adhere to a certain set of standards.This is looking really unprofessional on the part of the CB- junior high school elections come to mind