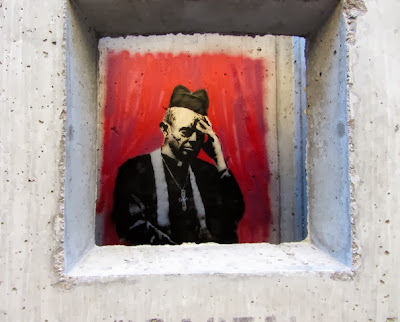 Banksy unveiled his latest NYC street installation yesterday on East Seventh Street and Cooper Square... And as this photo by @svvalera shows, someone has already defaced his "Concrete Confessional." 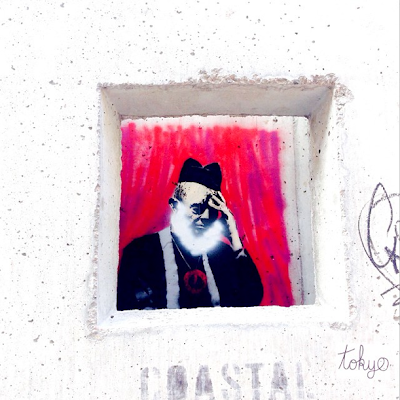 This marks the third of his pieces to be defaced during his month-long residency in NYC.

More about this via Angus Johnston at Student Activism:

Sometime last night or this morning, the priest in the painting was given a bushy white spray-paint beard which rendered him a dead ringer for Peter Cooper, the founder of the Cooper Union. At the same time, the cross that adorned his neck was replaced with a giant Flavor Flav style clock with a red face and hands set just prior to midnight, the symbol of the Free Cooper Union activist movement.

And there's apparently another confessional showing someone who looks like Cooper Union President Jamshed Baruscha... with a Free Cooper Union tag... 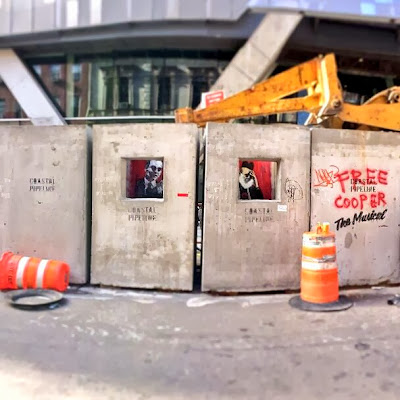 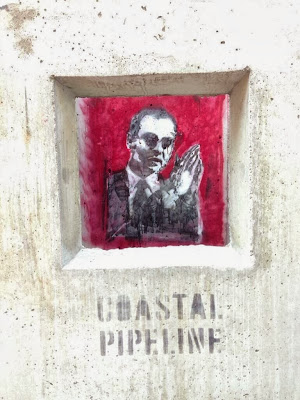 Let's be clear about what "defacing" means.
http://studentactivism.net/2013/10/13/new-banksy-street-art-transformed-into-free-cooper-union-student-protest-propaganda/

Well, it lasted over 24 hours. That's longer than some of the other pieces.

I like it better now. That Coastal Pipeline Confessional thing was too pretentious.

Also, LOL at the word "defaced" because Banksy vandalized these things, too.

Why not Banksy or his people defacing the installations? Many uninitiated think his work is defacement to begin with. This is a joke. Can it be proved it's not?

Perhaps Banksy did this as part of the evolution of the piece.

He probably had to get the approval/cooperation of the school to install all that junk in front of their building. The school probably thought the vague environmental anti-corporate anti-Catholic theme was delightful.

Then he pranked them?

If so then I'm impressed.

Its not defacement it is transformation. This is not someone drawing a mustache on the Mona Lisa, this is a street artist adding to the work of another street artist whose work happen to be installed on the campus of an art school, an art school which probably has a lot of graffiti artists, and also is in the middle of a big protest effort against "the man". I don't see this as defacement, I think it is highly appropriate. I'm curious what banksy would have to say about this actually.

Ah! Brilliant. 'The Musical' is an added bonus. Banks [sic] should be glad those kids actually made him relevant.

Is'nt silly to complain about defacement or even lauding Bansky since these concrete boxes will end up underground as part of the sewer system.

Anon 8:36. You do realize that these kids should be thankful that Banksy just made them relevant, not the other eat around.