The Beagle closes for good Saturday on Avenue A 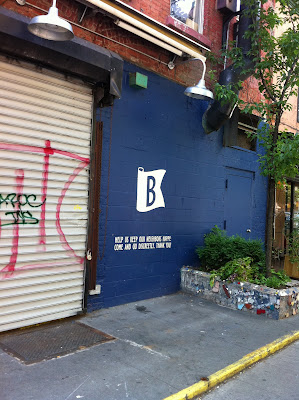 The Beagle, the craft cocktail bar at 162 Avenue A, closes for service after Saturday, according to a letter the owners sent to friends and customers. (We saw the news over at Eater.)

Here's part of the letter that the owners sent:

It is with a mixture of sadness and excitement that we announce that the Beagle will be closing. We have immensely enjoyed our time serving you all and getting to know this great neighborhood.

This was a difficult choice to make, but we believe it was the right choice. We do not feel that the physical space we currently occupy is well suited to the full time cocktail bar we have become.

Although our search for a new space continues, we accepted an offer to sell the Beagle's current home. We think this is fortuitous.

We are very excited about this opportunity to start anew, with a focus on cocktails, which are the heart and soul of what we do. The Beagle was a wonderful little place and we'll always be proud of what we accomplished there, and remain grateful for its many enthusiasts.

The new owners were on last month's CB3/SLA docket to open a "modern Australian" bar and restaurant.

The Beagle debuted here in the former Orologio space between 10th Street and 11th Street in May 2011. The Beagle's initial "pairing boards" included items such as Pressed Pig Head and Rum, Lamb Neck and Rye, and Scallop and Mezcal. The Beagle closed for part of last summer to rework their menu and cocktails.

There was some friction during the CB3/SLA meeting about this transfer back in February 2011. Per Eater's report at the time:

There was a lot of back and forth on this one. The representative mentioned the price points being reasonable, and community members responded that they saw a sample menu, where entrees were between $26-31. The representative said that was an old menu, and of the 31 items on the menu, 20 are $12 or under. The community members complained about pigs head, foie gras and animal rights.

I never went The Beagle. And I never met anyone who did go here. Anyone want to share their thoughts on the place?
Posted by Grieve at 5:00 AM

Email ThisBlogThis!Share to TwitterShare to FacebookShare to Pinterest
Labels: the Beagle

they had a real good kale salad. Fun spot for a drink and a bite. The food was better IMO before they re-worked the menu.

"We do not feel that the physical space we currently occupy is well suited to the full time cocktail bar we have become."

"Cocktails, which are the heart and soul of what we do."

WHAT?! They told CB3 they were a RESTAURANT. Once again CB3 was lied to. Lies, lies, lies from these guys.

Such a “pretentious” place, filled with the self-absorbed. Yelp loves it. The Ghosts of Beulahland and Orologio will haunt this location forever.

The food was actually quite good initially.... I found the costumers and staff both friendly and respectful to the neighborhood. I only saw someone drunk once in the place and the staff refused to serve him... I have been in the area for twenty years and found this place a great addition to the area.
I guess we now have a lot more places that are less "pretentious" that will better serve our community needs. (going to chug a slurpee and head over to the 13th step)

Crazy Eddie, and don't forget this space was Krua Luang, back in the 80s - great Thai food, they had.

"they had a real good kale salad. Fun spot for a drink and a bite" ...for the moneyed tourists and transplants and pretentious.

CB3 wasn't lied to. They knew The Beagle was lying. CB3 probably even coached them on what to say or put on the application.

Yelp loves The Beagle because, who writes reviews at Yelp -- mostly the transients and tourists and the pretentious.

As for the new applicant, it's not a modern Australian restaurant unless they serve witchetty grub and emu and kangaroo steaks. Then again, it's really another cocktail bar. Aussie, Aussie, Aussie, ... Oy!

Good riddance to a disgusting menu.

he said here's your foie take it and eat it honey

Great cocktails, I used to go there every now and then because it was chill and the staff was always super nice. But I don't think alphabet city needs more cocktail bars. Just go a couple avenues east and there are 5 places just like The Beagle.

They were lying pieces of shit who said, to my face, several times -- we will never become a bar. They are from Oregon with zero knowledge of the neighborhood. Their arc of failure went exactly as predicted. Of course they sold their liquor license, that's where the money is, when you can profit from a state sponsored license. Imagine if the state sold the liquor licenses at market rate, maybe we could lower the sales tax.

Fuck them and their pretentious ass place! I knew from day 1 that these West Coast NYC wannabes were going to fail hard! They knew nothing of the neighborhood or what they were doing. The whole "Cocktail" thing has completely become stupid with too many of these annoying, super pretentious, Kardashian like self-promoting dipshits pretending to be cool. It's one big continuous circle jerk of self-promoting goobers! There are some great cocktail bars in NYC but most of the ones that have opened around the East Village ad nauseum recently are ripoffs of the real things. The conformity of these places is amazing from the sameness of all of them. The goofy facial, hair with the lame tattoos, the vests with ties etc, the Up With People fake sincerity, nothing new there fellas! The East Village is about uniqueness, authenticity, not McPeople who dress and act like they are supposed to. Be real here folks and you might succeed.

I was counting down the days of this slaughterhouses demise since the moment I first heard about it's menu. Here's a big artisanal middle finger to stick up your cruel bloated hipster wannabe ass.

Went there once earlier this year. Very expensive. It was supposed to be a bit of a celebratory evening. Nearly too dark to read the menu, realized that all their emphasis was on cocktails. Food we got was good, but, designed to be appetizers while people drank very fancy 'artisanal' alcoholic things. I think Bistrouge did the fancy cocktail thing better and I too miss the thai place that used to be there before Orologico. (I never really liked that place, always had some weird thing with the staff and I *rarely* have complaints about staff!)

Walked by Saturday night and it looked open to me - it was packed and the windows/doors all open.