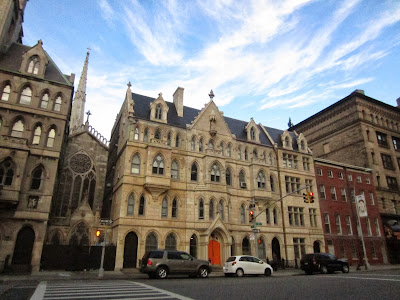 Over at 92-96 Fourth Ave. at East 11th Street, the construction netting is off the historic Grace Memorial House (part of the Grace Memorial Church complex) ... It had been under cover for months receiving some kind of scrub down... As EVG reader Terry Howell noted, "The cleaned building is a lovely warm creamy color. I was so accustomed to the NYC grime gray color." 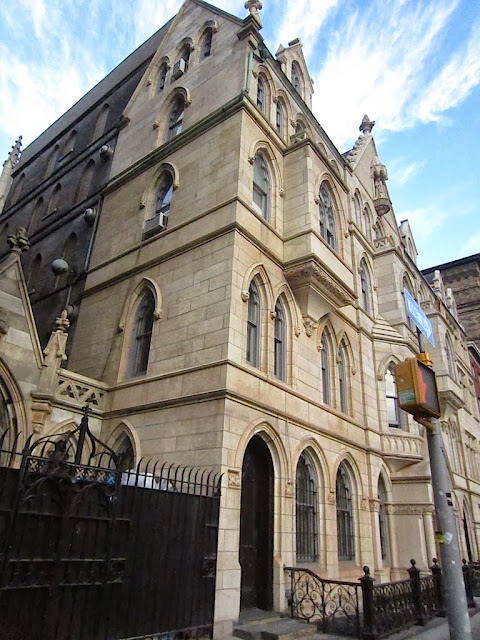 The James Renwick, Jr.-designed (and landmarked) building dates to 1881... 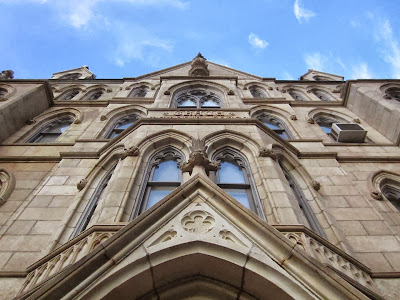 A little more history about the address via the 1977 NYC Landmark Designation Report:

No. 94-96 Fourth Avenue, Grace Memorial House, once known as the Day Nursery, was reputedly New York's first day care center. Given to Grace Church by the Hon. Levi P. Morton, vice president of the United States under Benjamin Harrison, in memory of his wife, it was designed by James Renwick, Jr., to accord with the architecture of the 1846 rectory on Broadway ... Renwick added a Gothic revival facade and made other alterations to the two earlier Greek Revival houses on the site.

When Grace Memorial House was reopened in 1927 to house low-salaried young women and female students, it was named Huntington House in honor of rector William Reed Huntington. In 1953 it became a rehabilitation center for girls, and in 1957 it was closed.

Now it looks like any old church in Ohio. Stick a fork in it, the East Village is done.

No way, 8AM. It looks beautiful. That's how the building looked when it was built in 1881 and how it is supposed to look! Geez!

It's great when these wonderful stone buildings are cleaned of the grim and soot of decades to reveal themselves as they once were. I remember Trinity Church in the Financial District in the 70's and 80's black was color of the granite once cleaned a process over several years the reddish color granite appeared surprise...Ohio please

I think you meant to say that: Any old church in Ohio LOOKS like this. Not the other way around.

Not sure the whole "New York is inherently superior to Ohio" thing works anymore. Maybe stick with Iowa and Nebraska to be safe.

Way too much good music out of Ohio.
Where's NY music?? Go to Starbucks to find out.

So cool and easy to be a cynic, eh? A fine church largely preserved intact from before the CivilWar is cleaned and presented, and the response is oh yeah the EastVillage is done.
Really nothing I can respond with that would not cause this post to be deleted, so I will just wish you good luck my friend.

US Civil War fought from 1861-5... This is an old beautiful church but not pre Civil War.

And screw Trinity Wall Street - just a shell for a financial tax free group of hypocrites who cut off services to the poor while lavishing themselves in luxury.

Cleanliness is next to.... the behavior used to culturally deracinate....a neighborhood, uh Europe during the wars, the city ...of the apearance of the homeless and poor. Half the city has fallen bellow the poverty level and the church is polishing up the exterior, poshing up the property. It seems kind of bad timing. Like the priorites while people are suffering is for the church to get its nails done. Right.

Um...was the Ohio comment not a joke (and a funny one at that)? Lighten up people.