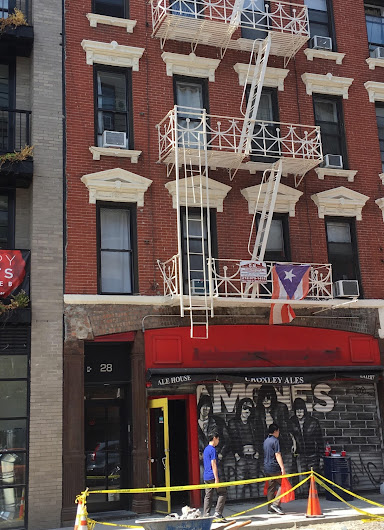 Workers have been putting in the OT (last Sunday and Labor Day, for instance) at 28 Avenue B, gutting the former Croxley Ales to make way for a new bar-restaurant from owners of the two Triona locations in the city.

To date, the name of the new establishment hadn't been revealed. (Triona's on B was mentioned as a possibility.) 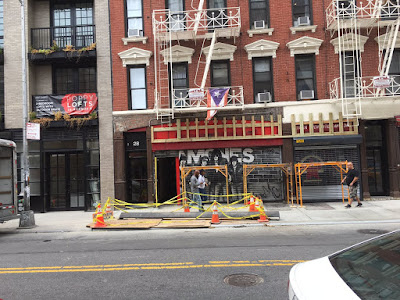 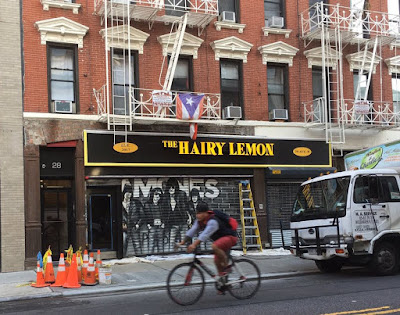 Perhaps this is a homage to Dublin's The Hairy Lemon Pub, which served as a locale for the 1991 film "The Commitments."

In other façade news, it appears that the Ramones mural has survived so far.

Croxley Ales ended its 14-year run on Avenue B after service on Aug. 30.

In August, CB3's SLA committee approved a new liquor license for the establishment. The Hairy Lemon will have hours of noon to 4 a.m. Monday through Friday, and 11 a.m. to 4 a.m. on Saturday and Sunday. The menu is "traditional American-Irish comfort food." The bar-restaurant will also have 20 TV sets.

No word on an opening date for The Hairy Lemon.
Posted by Grieve at 4:29 AM

Can't wait for the theme bar for Angela's Ashes.

I don't know if people know this, but "lemons" is a slang term for "balls" in Ireland. So, put 2 and 2 together.

That is truly repellent.

The noise in this neighborhood increases each year and the CB3 SLA committee is the main reason for it. While weekend evenings are horrendous with the level of noise the weeknights are now nearly as bad. One thing which would help is to stop bars and restaurant's which play loud music from having open facades. The only reason they exist now is create a spring break atmosphere on the street. Even is the law requires these places to shut them by a certain time, there is nobody enforcing this law and if you are unlucky enough to live nearby the evenings are ruined. Unfortunately for hard working taxpayers of the lower east side our lives and mental health come second to tax revenue from alcohol sales.

The Hairy Lemon - oooohhhh, how psy-kee-dell-ick!

So it's also called the Hairy Ball? Lemons probably would make more sense.

Since they are promoting this Irish cuisine thing, how many dishes will be potato dominant?

One hairy ball, one hairless. Old and new.

Gross, no thanks. I feel so bad for all the residents on Lower B who have to put up with all the crap that exists there now. I won't even walk between 4th and Houston on B anymore.

8:03 AM: I'm not an expert, but I did sit in on some 500 ft. hearings with the State Liquor Authority (that's were they determine if an on-premises alcohol license should be granted even though there are three licenses of the same type within 500 ft.), and the DEFAULT position is to grant the license if their is no community opposition at the hearing. CB3 can make recommendations to the Liquor Authority, submit stipulations arrived at with the applicant on methods of operation, and appear at the hearings if they want to, but they don't have any decision-making authority.

I stopped by Triona's on 3rd yesterday (Thursday). They said they were hoping to open up "within the next two days," so it may be open by Saturday.

They said they had been hoping to open up as early as that same Thursday but there were minor typical construction delays.

They should go out of business for the name alone. And for 20 tv sets.

This name is a sly reference to the control that bar owners have over CB3, and the utter lack of lemons that CB3 show. For a generation the Community Board has disregarded the guidance of neighborhood and block associations and has dismissed complaints from the residents who show up the meetings. CB3 has run roughshod over us.
Bar owners have us by the lemons, hairy and otherwise.

It's comedy, you see.

The Hairy Lemon: Sucking Balls Since 2017

Never thought that Croxleys would be a more dignified alternative to these hairy ballsters. I had actually high hopes for something new in the hood to grab good pub fare, but wont be crossing that threshold anytime soon. Sad that a simple dignified name would have earned my business, rather than a crass and degrading pun, Haven't we all had enough?

With all the crappy atmosphere on that part of B I never noticed what a beautiful building that is. The window crowns, window ledges, and fire escape are really pretty. But the first floor is an eye and ear sore!

Douchiest fucking name ever. If I would've had a beer there, I now will never. It sucks when you know a bar is a frat hole just from the name. We did not need something like this on this block.

Watch out Hair of the Dog, Hairy Lemons is coming for your bros and their sotority hangers-on.

Yoy know who most would go to this place, esp. on weekends? Bros and the sorority sisters from Hoboken, Jersey City, well pretty much Northern NJ; and Long Island, Westchester and Rockland... well you get the gist. Point is, these are the bars that they can find in their own backyard, but I guess it's cooler that they can foursquare, Yelp, and Instagram that they are edgy being in a brobar on the EV today! Thanks CB3.

Name is a castagation to the otherwise superb film and book.

If they want to reference to an Irish film, "The Metro Bar" would've been apt: a reference to "The Crying Game", since the approvals of the liquor licences by CB3 to all these brohaha bars are about deception.